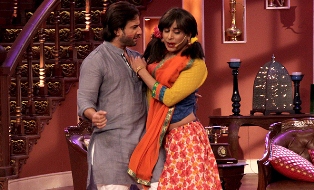 Even as the controversy about Sunil Grover quitting as Gutthi in Comedy Nights with Kapil refuses to die down, another talented actor takes the stage to play the cross dressed Dulaari. We are talking about Gaurav Gera who was last seen playing the title role in Mrs. Pammi Pyarelal on Colors who has been roped in to be part of the show.
He just shot with the team yesterday for the episode featuring Saif Ali Khan and since then everyone has been talking about it. Many are since then asking Gaurav whether he is a replacement to Sunil Grover and to put matters to rest Gaurav clarifies, "I am not a replacement to Gutthi but I play another character named as Dulaari who too is a small town girl. I was asked to portray various characters and as of now we are still in talks to define my permanent role in it. It was too quick and sudden but since I love the talent on this show I readily agreed."
However, this is not the first time that Gaurav has been approached for Comedy Nights with Kapil, "Talks were on right from the time that the show started but then I was busy with Mrs. Pammi Pyarelal and my musical show in Delhi. Now that I had no major commitments I decided to take this up. I will be doing more episodes in which I will come in as different characters as and when required."
Gaurav thinks that nothing is right or wrong and whatever happened with Gutthi and Sunil Grover needs to be sorted out, "We all see Bharti Singh performing as Laali and Raju Shrivastav as Gajodhar across all channels and everyone is ok with it. There are always two sides to a story and we need to listen to both. I agree with both Sunil & the team of Comedy Nights... unfortunately things went wrong and the situation got a bit dirty otherwise channels too are kind enough to co-operate."
Just like many of Sunil Grover fans who love him as Gutthi, Gaurav too hopes he comes back to the show, "I have worked with Sunil and love him as a dear friend and really hope that somehow the situation is dealt with in such a way that he comes back to the show. He has a different style of comedy and I think he has done it wonderfully!"
That is also the reason that Gaurav cannot think of replacing Sunil in the show, "We are not machines but human beings and Sunil's style, dialect, body language is something which no other actor can replicate. He was too good at it and if at all anybody replaces him as Gutthi that person will be under tremendous pressure as the audience is used to one particular character and actor performing it. Even the rest of the cast has been together for so long and has such a great tuning amongst them that everyone will take time to adjust!"
And that is the reason that even though he appeared as Dulaari, Gaurav felt the pressure while performing, "I was not replacing the character of Gutthi but still I thought people were expecting a lot from me. There was a lot of pressure on me even though I was not playing Gutthi. I had to give no hint from any angle and try to avoid doing what Sunil Grover does. I was on guard while performing despite the fact that I was only Dulaari."
Gaurav has hosted the show Hans Baliye with Sunil Grover and incidentally Kapil Sharma was one of the contestants on the show which aired on Star One. Apart from that he has not worked with Kapil but finds him to be a great performer. Does Gaurav who himself has enough experience not want to host his own show someday? "I think for that you need to have a different kind of talent altogether. Kapil has the gift of the gab. He is very spontaneous and is ready with his comments on the spot! Specializing in the stand-up field is different and so is doing fiction. I have done lots of fiction and if you achieve success in doing a crossover then it is good otherwise it is a different ball game altogether."
We are sure Gaurav's fans will want to see him as a regular character on the show!
Seema Khot Mattoo
13 Likes

Cyberpsychooo 6 years ago why did u quit? luved u as gutthi! will miss u - sunil grover

ashred12 6 years ago wud love to see him as a permanent char...but i hope they dont bring another person as guthi...no one can do justice to d char sunil grover did...they cud just say she eloped or something n bring dulaari as new relative of palak...

shubhika124 6 years ago Oh I had sensed that thanks to Gaurav's recent FB posts!
Glad its Dulari not Gutthi!

All The Best Gaurav Im sure you gonna do amazing!

atominis 6 years ago It's nice to see Gaurav so balanced. He is right about Sunil doing Guthi acts elsewhere apart from CNWK also. I am sure he will do well in his own space. He's damn talented and I hope this time the channel and PH respect the actor they are taking on board. All the best Gaurav!

Ipshitaa 6 years ago I'd love to see Gaurav too. I liked Guthi...lets see how Dulaari turns out to be.

greatsaleen 6 years ago Prefer Gaurav Gera over Sunil Grover's Guthi - I was the rare one who did not join in the craze :(