View Profile
The most awaited movie ‘Chandni Chowk to China’ ties up with the thrilling reality show ‘MTV Hero Honda Roadies: Hell Down Earth’. The film and the show share something that is ‘action’ and ‘thrills’. 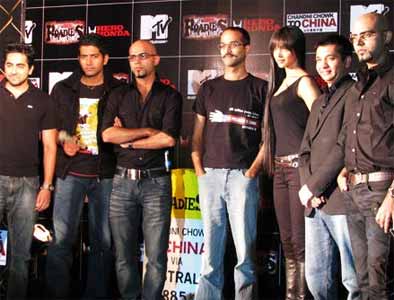 Featured Video
Trouble - Double duo Raghu and Rajiv, along with the stunning Deepika Padukone announced the tie-up and flagged off this exciting journey to the most dangerous country in the world- Australia!

The event also saw the latest promo video of the film along with Roadies 6.0.

On the association, Deepika Padukone said, “It’s great to be associated with Roadies – Hell Down Under; I watch the show myself and think it’s a complete blast! Chandni Chowk to China also boasts of a similar thrilling journey that you will have to wait and watch out for! I wish all the Roadies the very best of luck, I think they are going to need it!”


During the event, a challenging task was put forth before Deepika. She agreed to it immediately and slipped into action being on stage where she breaks a wooden plank with hand.

Looking at this Raghu and Rajiv says, “We look for something like this, someone who takes up challenges and does not look back”


Further Deepika and producer of the film Rohan Sippy shared few words about the movie ‘Chandni Chowk to China’.

A lot of action and adventure surrounds you in coming months. So take a deep breathe and get ready for the most thrilling  and exciting journey