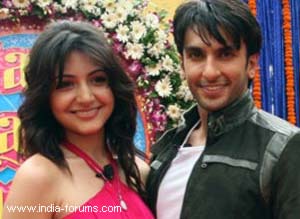 New Delhi, Oct 23 Actor Ranveer Singh seems to have beefed up for 'Ladies v/s Ricky Bahl' as the first look of the film shows him flaunting his six-pack abs.

The poster shows Ranveer posing shirtless with a toned up physique and the tagline reads - Ladies Beware! Ricky Bahl is coming.

After the stupendous success of 'Band Baaja Baraat', Ranveer is once again teaming up with Anushka Sharma for the romantic comedy, which releases Dec 9.

The film is about Ricky Bahl, played by Ranveer, who cons girls for a living but finally finds his right match in Anushka.