View Profile
Mr. Bhatti is a normal person. He works in a bank and hasa peace plan to save the world from war and suffering..Never mind if the peace plan is for Mr. George W Bush whom Mr. Bhatti has been trying to contact at the white house from his bank. And strange things are happening all around him. Like he is being followed and photographed. Wonder who these guys are?

Then he wins a free trip to Europe, though he has entered 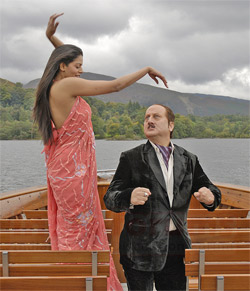 Featured Video
no contest. But... how can Mr. Bhatti go on this tripwithout telling his favourite star, Mr. Amitabh Bachchan about it. So he stands in the crowd outside the Big B's bungalow, but in vain.

He reaches the picturesque lake district. but again strange things occur to this normal man. An english beauty falls inlove with him. Her name is Alice. Mr. Bhatti is going crazy with so much attention being showered on him, but hemanages to supress his excitement. Soon something stranger happens. Alice vanishes and she is presumed to be dead. Murdered. And Mr. Bhatti is the prime suspect. Something crazier happens now. He is told that he is not Bhatti atall by the Scotland yard cops. He is a dreaded terrorist Abu Siddique. And then he is made to become Abu siddique.Not by torture. But because Mr. bachchan convinces him to take on the persona of Abu siddique. Yes Mr. Bachchan himself. His idol, his hero. And amidst all this bhatti's ernest desire to meet Pres. Bush remains the same. He wants to now save the world more than ever. And for that Mr. Bachchan is telling him to go ahead and fulfill his dream. Inspiring him all the time. And Bhatti … who we people think is foolish and crazy, ends up saving a big part of the world. Of acheiving the impossible and then meeting his favourite star in person. Mr. Bhatti is told by Mr. Bachchan that you are a hero now. Pooof ! Bhatti gets on to other exploits