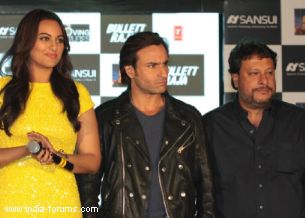 Around 50 bikers Wednesday took part in a rally here organised by the Election Commission to spread awareness about the significance of voting in the Dec 4 assembly polls in Delhi. The event, however, saw chaos.

Actors Saif Ali Khan, Jimmy Shergill, Sonakshi Sinha and director Tigmanshu Dhulia of the film "Bullett Raja", who were invited to participate in the rally, were forced to leave after reporters protested their late arrival at the venue.

The event was to begin at 11:30 a.m., but the celebrities arrived only after 1:30 p.m., angering reporters who demanded an apology as soon as the actors arrived.

A reluctant Saif Ali Khan said that he would have apologised if it was his fault, and blamed the organisers for the delay.

Several requests were made by the organisers and later by the celebrities as well to pacify the reporters, but to no avail.

The fact that several school and college students barged in at the small conference room to catch a glimpse of the stars further led to utter chaos and commotion.

The actors were whisked away in cars waiting outside, and returned to their hotels.

The rally was flagged off from north Delhi's Civil Lines area and covered parts of north and west Delhi.

The event was part of the Systematic Voters Education and Electoral Participation (SVEEP) activity -- an initiative to woo voters of the national capital to the polling booths.

"This is a one-of-a-kind event organised with participants from all over the country. It focuses on voters, especially youngsters, of Delhi," Ankur Garg, chief nodal officer of the Delhi Election Commission, told IANS.