'It's so sad. I didn't know about his illness. I only got to know about how unwell he was from his brother Akbar Khan whom I met on a flight. Feroz was such a stylish man. Lived life king-size. I can't forget all the good times we had while doing 'Qurbani',' Zeenat told IANS.

'Qurbani' was such an amazing film and one of the biggest successes of my career. 'Qurbani' epitomised the man, that larger-than-life stylish image. He was a very special man. 'Qurbani' happened at a time when all kinds of special films were happening to my career - 'Satyam Shivam Sundaram', 'Shalimar', 'Abdullah'... But 'Qurbani' and its music were phenomenal... 'Aap jaisa koi' and 'Laila o laila...'

The actress was in Rajkot, Gujarat campaigning for the Congress party when she heard of Feroz Khan's demise.

Feroz Khan died at his farmhouse in Bangalore Sunday after a year-long battle with cancer. He was 69.

Zeenat says as a filmmaker Feroz Khan never compromised on his vision.

'He wanted to be and do the best. He did everything larger-than-life. When he didn't like a set for 'Qurbani', he actually got it dismantled and built a new one. He wouldn't compromise on his vision. What he made was what he was in real life. He was a thorough gentleman, very charming and he epitomised a certain kind of masculinity that was way ahead of its times,' she said.

The actress regrets not meeting him often.

'It's so sad but we are so busy with our own lives we are unable to keep track of people who have played such an important part in our lives. But the time I spent making 'Qurbani' with Feroz will always always remain etched in my memory. Feroz Khan and 'Qurbani' are part of my life forever.

'Feroz was always revved up about the films he was making. He shot them all over the world. For the climax of 'Qurbani' we went to London. He had international technicians in 'Qurbani', which was unusual for that time,' she said.

'You know I just realised among all the actresses, I've worked with the maximum actors turned directors whether it was Feroz Khan, O.P. Ralhan, Amjad Khan.... I wish I had kept in touch. But that's the way of the industry.

'You give a hundred percent of yourself to a film and then move on. The last time we met was more than a year ago at an awards function. We both got lifetime achievement awards. We bonded backstage. I knew he was unwell, but not that unwell. I'm now going to make an effort to keep up with colleagues.' 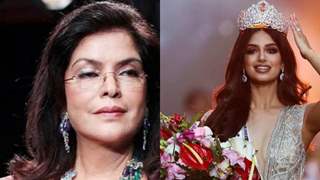