The 'Fashion Police' is back this time with a new set of victims and targets who have committed the deadly 'fashion' crime. Also, those who have  broken all records to set the 'Fashion Police' free to hunt them down.
Venue: Lakme India Fashion Week 2009, Calsberg Post-Party.
Target: Bollywood Celebrities.
Crime: Adorn and Advertise clothes that could turn any person insane.
Also, the 'Fashion Police' will be awarding 'chillies' to the saviors of the day.
Act: Good fashion sense.
Reward: Fashion Chillies (out of 5).
So, let's hit the LIFW 2009 ramp and also check out the celebrities who came to cheer their friends.
Starting with the good news, we first have:
Rubina Ali and Azharuddin Ismail 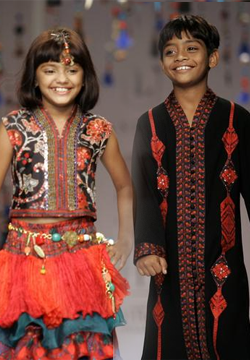 The actors who portrayed the younger star cast in the Oscar winning movie 'Slumdog Millionare' took to the ramp for designer duo Ashima and Leena and looked their adorable best. Adorning a Lehenga and Sherwani, the kiddos lit the ramp on fire.
Fashion Chillies:
Kunal Kapoor 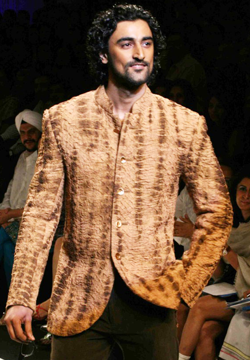 He defines tall, dark, and handsome, and he did the same on the ramp for the Mai Mumbai show. The stance was everything that could take your breath away. Walking with confidence and oomph, Kunal grabs his position on the Fashion Police saviors' chart.
Fashion Chillies:
Genelia D'Souza 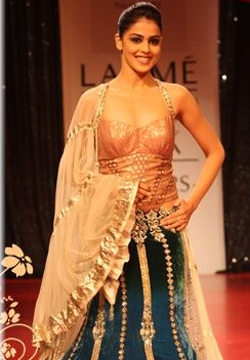 Walking the ramp for fashion designer Manish Malhotra, Genelia looked her fashionable best in the outfit. Looking like a mermaid who's just made her way onto the ramp, Genelia's smile and persona captured all. For looking sheek and glamorous, Genelia makes her way to the saviors' chart.
Fashion Chillies: 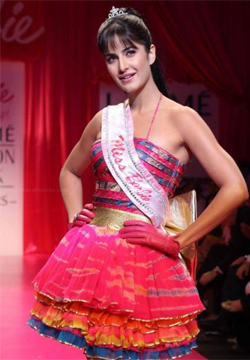 The latest face of the 'Barbie' brand, Kat showed off the Barbie collection at the Fashion Week.
Dressed in a bubblegum pink dress with a golden bow, Kat endorsed the brand stunningly. She truly did look like a barbie walking down the ramp who is now going to be the fancy of a million young girls.
Fashion Chillies: 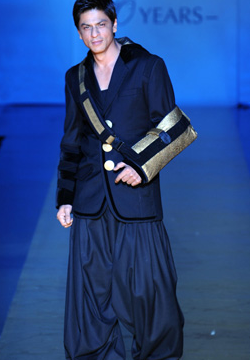 The show stopper for Manish Malhotra, SRK showed off his strut with a fashionable custom-made golden sling for his recovering shoulder. After dazzling everyone with his stunning appearance,  SRK made sure that the audience got a little more of him with an impromptu speech which had everyone in splits the very SRK'ish style.


For looking like a killer in that outfit, SRK has captured his place yet again in the fashion saviors' list.
Fashion Chillies: 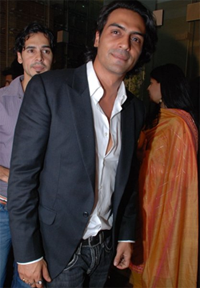 Arjun made his way to the Calsberg post-party in the classic white shirt- denims look, and we think nobody could do it better. To add zing to the look, Arjun wore a blazer which along with those long locks made him look no less than a Greek God.
All we got to say is' 'Mama Mia'..!!!
Fashion Chillies: 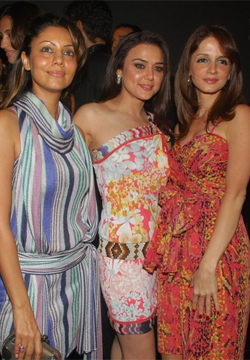 
And now coming to the criminals of the fashion police, those who didn't take our warnings seriously.  Well, its time for you to regret your decisions.
Genelia D Souza 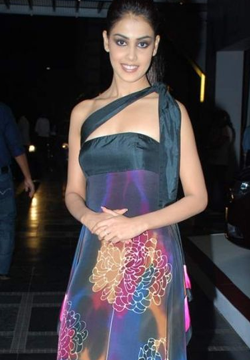 Just when you thought, that this peppy actress had all the looks, acting, and the fashion sense, she came out draped in what could have been described as a curtain at Anand Kabra's show.


On top of that, the actress chose not to adorn any accessories which was a really bad choice, as it brought the entire focus onto that piece of upholstery.
Minissha Lamba 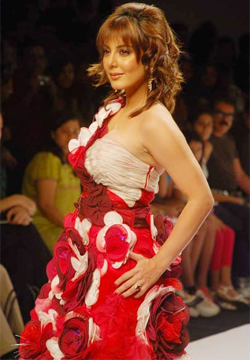 The gorgeous lady opened the collection 'Innocence' for Archana Kocchar.
But the first glance on the dress proved that the collection should have been named 'Catastrophe.'Remember Adah Sharma crafted class roses for her filmfare dress?  Well, Minissha's dress went a step ahead by adding some of those autumn feathers.
To make it worse, her new hairdo with the fringe does not compliment her face structure.
Either way, we think that wearing the dress was in itself enough of a punishment for Minnisha.
Twinkle Khanna 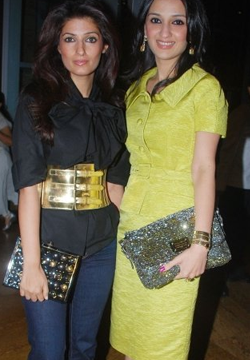 The newest entrant to 'Superstar Wives' clan, Twinkle, who has tasted success herself, walked in to the post-party violating the terms of the Fashion Police.Sporting blue denims with an ill-fitted black blouse, Twinkle made things worse for herself by accessorizing the already horrific blouse with a huge gold chunky belt.
If that wasn't enough for the bling, she soared to newer heights with a complimenting bling purse.Honey, agreed your hubby's recent success has lifted you to the skies, but let's not forget the ground rules of dressing!!
Kajol-Tanissha 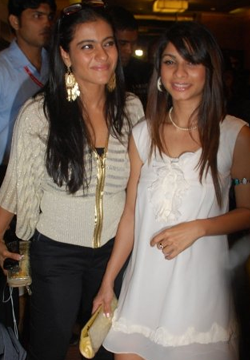 As soon as the sister duo walked in to the post-party we could not help but sympathize by saying, "Oh dear lord! What did these two young and pretty ladies do for you to have given them a fashion sense like this?"
While both of them chose white as their color, it seemed to have deceived both the ladies.
While Kajol chose the cigar pants, sis dear went in for a flirty dress. While Tanissha ended up looking like a goose (in the nicest way), Kajol looked like she'd retired from Bollywood in the 70's.
Well it's a bad day to worse with those straps on Kajol's feet.Only thing we like about the 2 of them were Tanissha's cute sandals.Girls the next time you have to attend an event, just give us a call, we'll style your clothes FOR FREE!
Sophie Chaudhary 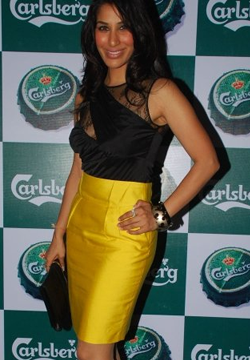 Sophie darling turned out at the post-party in a black and canary yellow dress. While we love the colour combination what's with the style? The chunky bangle and the lace did not work with this look.
Individually a good piece, but on the whole the outfit with the accessories was a let down, and we think the VJ turned actress should have tried the same dress with softer accessories.
But a thumbs up to Sophie for those gorgeous black pumps shes wearing - NAICE!
Amisha Patel 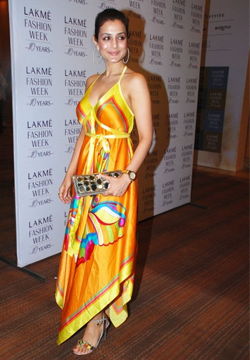 Allright, let us get this straight Amisha: did you let a 6 month year old infant style your dress?
Because that piece of table cloth could have been put to better use than turning into a garment.
Although we like the hoops and the sandals, the dress takes too much of the focus for us to notice the brighter points of your look.With the orange and the yellow looks, Amisha would have been enough to provide the lightings for the event.
Well, Amisha, just one pointer - hire yourself a new stylist.
Vikram Chatwal 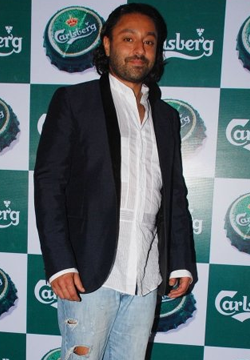 And this is an example of the classic white shirt with denims going haywire.
We saw Arjun and thought he looked like a Greek God with the same look, and now we present the hotelier who shows us how the same clothes can make you look like you met recession more than you thought you would.
The torn jeans, the horribly designed white shirt, a blazer that we don't care about, and those strands of hair that look like a broom, maybe Vikram could do with a little discovery of man called a 'Mirror.'
Celina Jaitley 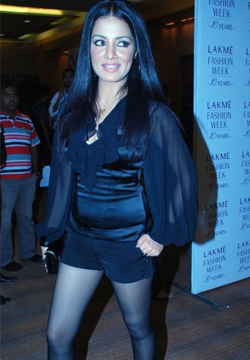 And saving the best (or in this case the worst) for the last, we have former Miss India Celina Jaitley.Now now, Celina did you get an invitation to some other party that we aren't aware of?? Probably a Moulin Rouge theme??
The black stockings with the shorts and that Arabian Nights inspired blouse, what can we say?
It's said a picture is worth a 1000 words, and this probably explains the saying the best. Check it out for yourself!!
That was all that the Fashion Police had for all of you guys this time, but with celebs supporting us so much we are sure to get back to you with spicier pastures.


Note: The opnions listed above are the . Any bashing will result in serious concequences!