Festival de Cannes is one event that has received much attention from the Indian media these past few years. The reason being the increasing number of Indian attendees at the festival; it is a great platform which gives Indian celebs exposure at an international level. Despite the many interesting people who attend this event, there are a few names who grab more attention than others. The Fashion Police takes a snappy look at the ladies in attendance and what they decided to don for the prolific event.
Mallika Sherawat 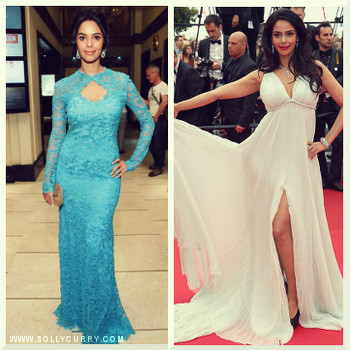 Mallika Sherawat has been known to show up at the Cannes Film Festival in various degrees of daring and skin-revealing outfits. However, this time she toned it all down and decided to go the opposite route and covered herself completely, much to our surprise. In her first appearance, Sherawat wore a blue Emilio Pucci lace gown. Once the rare sight of seeing her all covered wears off, the gown doesn't quite make an impact. Lace gowns have become too common now and for an event like Cannes, she should have gone for something more unique.
The second appearance on the carpet saw her again in another Emilio Pucci gown, this time pleated, and she couldn't stop flaunting the Monroe inspired look with all the turning and tossing. But we aren't complaining as that's the way it was supposed to be shown. The choice of simple diamond jewelry worked well with the white of the dress but the black pumps were a total eyesore. The hair could have also been styled differently; let loose weighs down the airy look. Overall Rating: 2.5/5
Sonam Kapoor 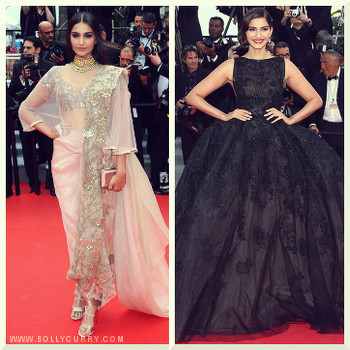 Thanks to her fashion choices, India's very own widely acclaimed fashionista has been garnering much international attention and Cannes has played a big part in it. Ever since Sonam Kapoor has started regularly attending the event, she has become one to watch out for. On her first appearance, Kapoor wore a black Ellie Saab couture gown. The gown was a typical choice as it's not the first time she has opted for the 'princess' look. However, while someone else might've made this look a failure, Kapoor confidently carried the obviously heavy gown well. The hairdo was perfect and the never unfaltering smile did wonders.
Her second appearance was what Kapoor does best, it was a stark opposite to her first one; from dark to light, western to desi. Wearing an Anamika Khanna saree inspired couture design, the pretty lass looked stunning. The pale pink colour of the dress matched perfectly with the heels and the clutch and her straight hair made a statement on its own. This was definitely one of the most memorable looks of Kapoor and well worthy for an international event such as the Cannes. Overall Rating: 3.5/5
Aishwarya Rai Bachchan 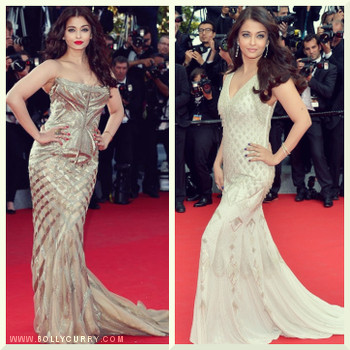 The woman who started it all. Aishwarya Rai Bachchan is a Cannes veteran and her stunning beauty is always sought out by national and international media at the event. Though her past few appearances at the event have gathered more criticism than praise, this time she made sure that all the eyes were on her. And my my, were they?! When Rai stepped out in a golden Roberto Cavalli gown, the world stopped and stared at the sheer mesmerizing beauty that is the former Miss World. The dress was the perfect choice as it hugged her figure flawlessly and credited all her curves. The voluminous hair, red lips and the confidence which the lady oozed as she charmed everyone around made this one of the most beautiful looks the event witnessed this year.
For her second appearance, she picked out yet another Roberto Cavalli gown. This time the gown skimmed down her curves but made her look beautiful nonetheless. However, it feels that all the impact was used up in the first appearance that this look was a little damp compared to the former. Still, better to play safe and she did look gorgeous albeit the similarity in the trailed gowns. Overall Rating: 4.5/5
Throughout the years, Cannes has not only influenced filmmakers to test their creative limits but has also provided a platform to all those who deserve to be seen for their geniuses. And the fashionistas of the world have grabbed this opportunity with all vigor, as not only cinema but fashion too has no boundaries. Our Bollywood divas have created a niche for themselves and have proven that they are no less rather much greater.
Agree? Disagree? Tell us all about your thoughts on this year's event in the comments box below.
Writer: Maisooma B.
Editor(s): Nabila S. and Jenifer Y.
Graphics: Marsh P.
Do you have a suggestion or comment for BollyCurry? Drop us a PM at BC_Dropbox today.
17 Likes