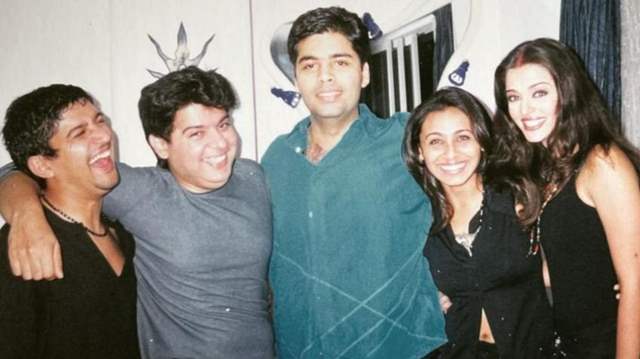 Bollywood is like one large family, with various performers who are even remotely connected. We frequently get a glimpse of previously unseen photographs and events from the life of our favourite celebrities thanks to social media. In the same vein, Farah Khan surprised us with an adorable post including our favourite celebrities on Friday morning.

Farah shared a flashback picture on Instagram, which included Farhan Akhtar, Sajid Khan, Karan Johar, Rani Mukerji, and Aishwarya Rai Bachchan. The iconic photo shows Karan Johar, as we know him now, dressed simply in a blue shirt and denim. Aishwarya also wears the sindoor in the shot, which was taken in 2001.

Farah clarified how and why Aishwarya was wearing sindoor in 2001 in her article before fans went crazy.

The choreographer-director claimed that Aishwarya had returned from the Devdas filming with sindoor in her hair at the time. Farah's first home, which she had acquired in Mumbai, was the setting for this charming and genuine photograph. Farah also made a joke about Karan Johar wearing non-designer clothing, as is her custom.

Replying to Farah's post, Karan commented, "Oh my god!!!!" To which, Farah adorably said, "@karanjohar so cute u were."

This isn't the first time Farah and Karan have pulled each other's leg. The pair's Instagram banter is a tremendous hit, as they delight millions of fans and followers.

+ 8
9 days ago Whew the flashback is brutal. Cakeface