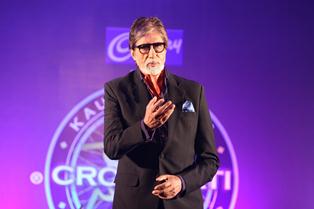 The next contestants to come on the hot seat are Arpit Sharma &  Ankit Sharma from Bikaner ( Rajasthan). They are real brother and they call each other Jai- Veeru. They are opposite to each other but in the end they inspire each other to learn and grow. They have been trying to come on the show for the last 4 years as it was their grandfather's last desire was that he meets AB but unfortunately he couldn't make it and expired in December.

Their grandfather had a breathing problem and when they took him to the hospital they discovered that the hospital lacked adequate equipment's. Therefore they have decided to donate to such hospitals so that no one ever loses a loved one because of reasons like this.

They gift Amitabh Bachchan a picture of Bikaner's famous god. In the end of the episode a personal picture of AB is shown, the picture had AB with a fan when AB had just got discharged after his deadly Coolie accident and this fan had made a promise that if AB recovers from the accident he will come walking backwards from Vadora to Mumbai, that is approximately 400kms in distance.

There is a temple name Siddhivinayak in  Vadodra so he started his walk from there and ended in Mumbai's Siddhivinayak. AB feels that today he is alive because of this fans prayers and love from many like these.

+ 4
6 years ago That's Amitabh Bachchan mania. Resides in heart of every Indian.