View Profile
Bringing a smile on everyone’s face with his comedy acts, Govinda may have seen lots of ups and downs in her career but the actor still looks to be positive. After a scintillating performance in Partner, Govinda is yet again ready to tickle your funny bones with his upcoming release Money Hai To Honey Hai. We were lucky to share a few golden moments with this versatile actor…

Q. Tell us about your character in Money Hai To Honey Hai… 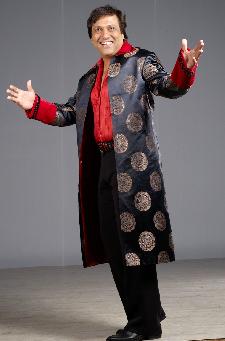 A. I am playing the character named Bobby. In this film every character thinks alike that where’s there’s money then only there exists a honey. Bobby wants to enjoy his life to the fullest and for that he wants to earn a lot of money. He desires to attract a number of girls with the help of that money.

Q. Do you, too, personally believe that money hai to honey hai?
A. See, one who gets hurt can only feel the pain. There are a lot of youngsters who doesn’t have a girlfriend and aren’t able to get married since they don’t have a good job or enough money. I have personally come across such type of people.

Q. How different this film is going to be from your previous comedy flicks?
A. Nowadays I have started doing different films. Instead of getting emotionally attached to any film I now think it as my job. It’s necessary for me to make sure that on the completion of the film, it earns profit and isn’t thrown out in the garbage. Ganesh Acharya came to me with this film while the casting was on. I had rejected his first directed film Swami and I was on the verge of rejecting this film also, but somehow he convinced me into it.

Q. Viewers expect a lot from you. Do you feel you would be able to meet their expectations?
A. No one can calculate the likes or dislikes of audiences. I liked the one-liner of this film. I also liked the songs of this film which are proving to be hit numbers. I totally believe that the viewers would love watching this film.

Q. Ganesh Acharya has worked a lot with you as a choreographer. But what would you like to comment on him as a director?
A. Ganesh is trying hard to make a name for himself as a good director. He is really energetic. The film, too, has got a lot of freshness. To judge a good director is very difficult. Recently I also got an opportunity to work with Ravi Chopra. Even now he desires to create some new things in his work. Even I am associated with this film industry for more than 23 years and like to learn something or the other with every film. I feel as if I have just joined the film industry.

Q. What have you learnt until now being the part of Bollywood?
A. In which language would I describe what I have learnt! There are different languages like the one you speak, the one you see, the one by which you emote, the one about how you walk, etc (laughs).

Q. Any interesting incident you can recall while shooting for this film?
A. Two times I reached before Ganesh at the sets (laughs). I feel this is one of the most memorable things I can remember. I am sure my previous directors would fall ill on knowing about it.

Q. Many people have question mark on your jodi with Hansika. What do you have to say about it?
A. (laughs) It would be better that you first watch the film and if the viewers appreciate our jodi then it would be better for you to remain quiet. Frankly, even I was taken aback after hearing for the first time from Ganesh that my co-star is going to be 16-year-old girl and I questioned him instantly. But Ganesh told me this beautiful line that I must not sideline other’s job. It won’t work if you always think about yourself. That’s when I agreed working with her.

Q. How was it working with other actors?
A. I enjoyed working with all my co-stars. Every night we all bhaiyas used to get together to have fun.

Q. It’s been said that life gives a second chance to few lucky ones and you seem to be the one of them?
A. You can say this, but the question that arises is when does life gives all the first chance! There are lots of people who hardly even get their first chance. I think whatever I am today is due to the blessing of my parents.

Q. We have heard that many authors have blamed you for using the folk songs sung by your mother in your films in a very vulgar way?
A. These all are bullshit. First of all my mother has never sung a folk song. She was a classical singer. She used to sing thumri which cannot be used in films.

Q. We have heard that your daughter Namrata, too, is getting into films. How is she doing now?
A. I am happy that, proving herself to be my good student, she has decided to enter films. I want to make her aware of every part of this industry so that she wouldn’t have to struggle entering it. Very soon I would be sending her to America for an acting course.

Q. You have faced a lot of controversies in both your filmy and political career. What would you like to say about it?
A. Once your name gets famous, you are tend to be associated with one or other controversy. When you are in the process of climbing the ladder of success, there are few people who want to pull you down. And these controversies are the result of it. If I distract my attention towards such things then I wouldn’t be able to concentrate on my career.

Q. So, would you want to restart your career in politics?
A. Politics isn’t a career for me; it’s my responsibility which Soniaji has provided me with. I am happy that this year things have worked out better for me.

Q. Tell us something about your upcoming projects…
A. My next release is going to be Ravi Chopra’s Banda Ye Bindaas Hai, then there are films like Chal Chala Chal, David Dhawan’s Do Not Disturb, Jagmohan Mundra’s Excuse Me Please, Neeraj Vohra’s Do Lucky, Chai Garam, Suneil Shetty’s Loot and Life Partner. All my characters in those films are very interesting.

Q. We have heard that you are also working in a Bengali film titled Jewelry Box…
A. I haven’t signed that film yet and talks are on.