Optimystix is one of the first and leading players for Branded Entertainment in India and is headed by Sanjiv Sharma and Vipul Shah. A pioneer in content creation with a creative value to the ideation-to-implementation process across various genres of entertainment, Optimystix has programs like Indian Idol, Khulja Sim Sim, Comedy Circus, Bathroom Singer, Jjhoom India, Krazy Kiya Re, Comedy Circus 2 and the latest Bollywood Club in its kitty.

Here is Sanjiv Sharma in an exclusive chit-chat with Telly Buzz.. 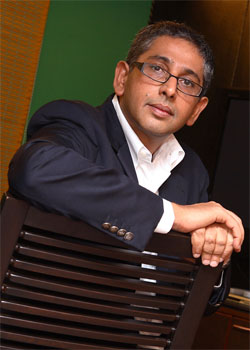 Featured Video
Optimystix has been associated with many a successful shows. Can you talk about your growth curve in television…

Our growth curve started with Khulja Sim Sim which was based on an old American format where we got the chance to think creatively. The show was iconic in it self and was the leader in the Friday evening 9 PM slot.

Then we moved on to Kisme Kitna Hai Dum which had the future stars Sonu Nigam and Husein Kuwajerwala in it. This celebrity karaoke show was a wonderful platform for Optimystix. Later came Kuch Kar Dikhana Hai on Star Plus which too did well.

It was then that Star Plus came to us with the idea of Star Parivaar Awards. We did the creative thinking and also managed coverage of the ground event. The awards I remember got an alarming TRP then.

We then gave the first ever reality show Indian Idol. I would call this more as a Talent Hunt show rather than a reality show because this was the platform where contestants could showcase their talent and change their lives. Indian Idol was a top grosser for Sony.

Then came the very important phase of Optimystix where we did a fiction show Yeh Meri Life Hai with Sony that ran for nearly 324 episodes and was only second to Jassi at that time.  Comedy Circus happened after that, which was purely an Indian format. The best part of Comedy Circus is that my creative team came up with this unique concept which was a runaway success.

You were one of the fore-runners when it came to reality shows. Now each and every channel has at least one reality show running. So what are the improvements that you have been bringing in, to your shows?

Well, when you talk of new things, we had Kaho Na Yaar Hai based on the format of Friends Forever which was a window into the lives of celebrities thro’ their friends. This was completely refreshing with a jaw of comedy attached.

As I told you, Comedy Circus was a format we came up with. It cannot be regarded as stand-up comedy which is seen in many other shows. It is totally a different genre where two people put up an act together.

Now we have Bollywood Club on Zoom which has come up from our learning of the past. There was a question looming large - Are we really a community who need to judge contestants for just a period of time? How about playing the role of enabling talent and allow them to succeed in the market place rather than judging them only till a show is on? This thought process gave us Bollywood Club where we are just the enablers, we do not pass judgments; we just provide a platform for two people to meet. The initials feedback got for this show has been amazing.

What is the main reason for not venturing out into the soap world / saas-bahu sagas?

Well, the pressure on us to deliver non-fiction shows was so high that we did not want to venture into fiction shows after Yeh Meri Life Hai. But then we realized that we had not done enough in fiction despite the success of Yeh Meri, so we brought in senior people to work on various concepts and now we have come up with Paani Puri on Star One. We are actually thrilled to see that this show is picking up and it is real fun to watch with family.

We have heard you are coming up with few more fiction shows.

We are having talks with few channels and now that we are back to the fiction world with Paani Puri, more things will materialize very soon. We have nearly 15 great concepts lined up, but the key for fiction is preparation and we do not want to hurry.

Which do you think can cover the major audience – Realities or soaps..

Well, audience is getting smarter and the options are many right now. You will see the dominance of one type of show over the other, as this is an era of creative brilliance. Reality shows are sure to stay, however as a businessman, I always see fiction with the 70-30 advantage over reality shows.

Most of the reality shows today are ‘Scripted’. What do you have to say to this allegation?

I can only say that the essence of getting great reality shows is not scripting it. You need to create situations that lead to particular reactions, and this is the way a right reality is done. For this, you need to understand the environment, you need to study your contestants and then put forth a situation before them where you too do not know how the reactions will flow. If any community feels that the success of a show is to script it, then I don’t think this is the right approach. Audience has gotten smarter and if the show’s credibility gets questioned, then the right impact will not be there on the audience.

Jhoom India Season 2 is fast approaching, so what can we look forward to now?

Well, we surely have a contract for 4 seasons of Jhoom with the channel, but as of now, nothing is decided as they have a big reality show going on, Saas V/s Bahu. So we will talk when the right time comes.

The buzz now from Optimystix is Zoom’s Bollywood Club. Can you take us thro the concept and details?

Every show will boast of a concept in nearly 20 words. But as far as Bollywood Club is concerned, it is nothing more than enabling talent. These communities of people have larger than life dreams and the show is all about understanding them and giving them an opportunity to succeed. The show has no elements of a typical reality show and we never intend to deviate from the key element of the show.

After the success of Comedy Circus 2, Kaante Ka Takkar has started. So don’t you think it is an overdose for watchers?

See, this was an organic process wherein my team came up with the idea of pitting the Comedy Circus 1 Jodis with the jodis of Comedy Circus 2. The best part is that Archana connects well with the first season participants while Shekar Suman relates more with Season 2. So this will give us the Best of Bests..

With a big basket of reality shows being catered to the audience now, what do you think lies ahead for the audience.

Well, I can give you only my thought process here and I promise that people will see really fantastic stuff in the coming phase. But one thing is clear that change is inevitable. The tried and tested roots of past are failing miserably and audience wants a change. The community who does not love to change is left with no option at all. The great formulas of reality shows which were written in abundance can be now sold at the bhel puri mart. Reinvention on a day to day basis is what is needed now to be the leader in the place.