After bringing Feat Factor in the form of Khatron Ke Khiladi to India, Endemol will now bring in their action-packed family entertainment game show 'Wipe Out' into the homes of the Indian TV audience!! 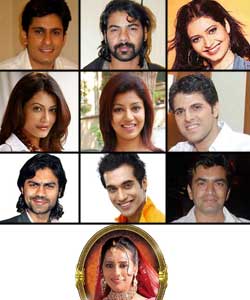 Yes, you heard it right!! Wipe Out is the show in which contestants from all walks of life compete in the world's biggest television obstacle race to win a coveted title and a big cash prize. In each episode, twenty-four intrepid contestants - male and female, young and old, fit and not-so-fit - take on four new gruelling obstacle courses. They will have to go thro' demanding challenges that includes racing down a slippery slope, or crossing a series of precarious giant bouncy balls etc. With muscle, grit, entertainment, action, impact and spectacular wipe-outs, this really is survival of the fittest.

Endemol India will now launch its first season of Wipe Out on Imagine, the shoot of which will start soon in Argentina. Endemol's international set for Wipe Out is based in Argentina.

We hear that the contestants are being tested for their physical grit, will power, and many such attributes before they are sent into the major obstacle race.

Our source states, "The show will be shot in units, and each unit will comprise of a certain number of contestants. The first unit has already left for Argentina yesterday. Lots of big names from the Hindi television industry have been approached".

Akashdeep Saigal is scheduled to make his comeback with the show. Shabbir Ahluwalia, Amit Sareen, Karishma Tanna, Payal Rohatgi, Debina Bonnerjee, Raja Chaudhary, Priyadarshini Singh (from Rahul Dulhaniya Le Jaayega), Kushal Punjabi are some of the names that have been more or less finalized.

In fact, Debina, Raja, Priyadarshini, Payal have taken their flight yesterday to be part of the show. Few other names that are floating around include Manish Goel, Jay Bhanushali, Bakhtiyaar Irani, Chetan Hansraj, Gaurav Chopra, Kirti Kelkar, Mouni Roy etc.

Karishma Tanna confirmed to us that she is doing the show Wipe Out. We tried our best to call Shabbir, Amit Sareen, Kushal Punjabi, Akashdeep but we could not get in touch with them.

Chetan Hansraj told us, "I did not take up the show due to certain reasons".

Jay Bhanushali expressed that he was really interested in taking the show, but his dates were not free. "I am doing DID Doubles presently and could not take it up".

Gaurav Chopra told us, "Talks are on, but nothing is finalized yet".

Bhaktiyaar simply denied that such a show was offered to him.

We tried calling Saurabh Tewary, Programming Head, Imagine but he was not available for comments.

We hear that a huge list of celebrities from all walks of life is being considered for this show, and this list is just a humble beginning…

_muskaan_ 10 years ago good luck debina!!!!!
and we know dat if a couple stays together in a house doesnt mean dat they have some intimate things going on!!!

WooHooHaha21 10 years ago aww Jay should have been a part of it aswell!! But im happpy for Shabbir. karishma tanna and all the others as well!! Goodluck!!

starasdf 10 years ago LOLwipwout is a awesome showw :Dow :D @tinasinster yeah i hope so too and they are taking in celebrities i want to see this works out

hydrogurl001 10 years ago sounds awesome! i really loovee that show!

-midnightsun- 10 years ago love total wipeout!! this should be fun :P

Tinacool 10 years ago Have watched Wipeout US and UK and also watching Wipeout Australia now. Hope it keeps up to the international standards unlike Khatron ke Khiladi which was a complete washout this season.