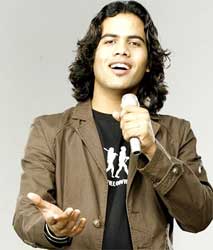 Naushad Ali Kawa, the Jaipur boy hailing from a family of musicians, tells us that he is overcoming the initial shock of elimination on Sony's Indian Idol and looking forward to sunny days in Bollywood Boulevard.

Excerpts from our conversation...

Were you prepared for the elimination or did it come to you as a shocker?
It came as a shocker to me. I was totally under-prepared. I thought even if I came in the bottom three, I would get out of this…

Why do you think the junta didn't support you…is it because you started experimenting and tried something other than sufi?
I did hardwork, even with the whole experimenting. I am happy I went for it.

You are from a musical family…so does the elimination affect you more?
Well, I don't think it's that way. This would have been just as important if I were from a non-music family.

What do you plan to do now? Have you been approached by anyone with offers yet?
I plan to stay back in Mumbai and pursue my dream of singing for Bollywood films. So far no official offer has been made.

Do you think the junta is favoring girls…girls are giving mediocre performance yet getting consistent votes …
I don't think Bhumi and Tia gave mediocre performances. They were very well in their own way. As far as junta votes are concerned I don't know how that works. If I would have known, would I have gotten myself eliminated (smiles).

We hear a wild card round is just round the corner. How much chance do you have?
I'm keeping my fingers crossed and praying fervently to get back in the competition with a wild card entry. I hope it happens…

After the elimination what was judges' feedback?
Well, Sunidhi told me to understand the fact that this is not the end but a beginning for me. She told me not to think as if everything is over as my run at Indian idol is finished.

When Swaroop was there with you in bottom three, what went through you?
Well, for Swaroop it wasn't the first time that he was in the bottom. But for me it was the first time. I knew that the chances of one among both of us getting eliminated existed however, when the news came I was in total shock. I just went completely blank and didn't sense anything that happened for a few minutes after that.

What gives you the strength to overcome failure and move ahead in your career?
It was my mother's dream to see me on television. And thanks to Indian Idol that dream turned into a reality and I could see how happy it made her. Now I want to fulfill my grandfather's dream of me becoming a successful singer. So I will continue to work towards achieving it.

reshma.ravi1 10 years ago he should come back.......after he had gone i hate to see the show

Micky_elle 10 years ago Its shocking tht he got elliminated, when he not once also came in the bottom 3. Its distressing to see such awful singers still on the show, naushad deserved to be in the top 3. I dont feel like watching idol anymore.

ROBlicious. 10 years ago Nausahd Seriously how could you go out? People don't know how to vote. I want him baccccccccck.

dr.basket 10 years ago best of luck INSHALLAH u would be back through wild card entry

shine_bright 10 years ago dude..the indian janta ..honeslty doesn't know how to vote at times.! It just feels like they go on LOOKS rather than the VOICE of the person. ii hate how people out of the country can't vote..! :( !

...San-Yo... 10 years ago Yes Sunidhi is very rite, journey has just begun and be positive...
His elimination was shocker but it can be either way also.....
Else best of luck to Naushad