Last week, we gave you a glimpse to your favorite singers and dancers performances on Zee TV’s Ek Se Badhkar Ek. As this week’s episode has the contestants rendering their best in the show, Telly Buzz tells you who is ousted from the show. 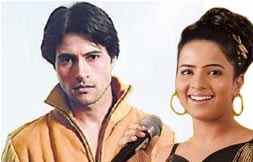 Featured Video
As revealed last week, the teams that found themselves in the bottom three were Poonam-Apoorva, Harpreet-Amrapali and Rajshri-Amit. Eliminations this week happen based on audience polls.

However, due to audience polls, there were two teams with the lowest votes; Poonam-Apoorva and Harpreet-Amrapali. To decide which team gets eliminated from the show, the judges had these two teams perform once again and awarded them points for their individual performances.

Although Amrapali and Harpreet had rendered a mediocre performance last week, they performed comparitively well to make them the top scorers among the two, thus resulting in the ouster of Apoorva Agnihotri and Poonam Yadav from the show.

So, don’t miss to catch up on all the excitement on Ek Se Badhkar Ek every Saturday and Sunday at 7.30 pm only on Zee TV..

14 years ago Awww...they were ousted so quickly :[

+ 3
14 years ago Really felt bad that Apu and Poonam are out !! Seriously they cud'nt stand Ravi Kissan so they felt better of out !!!

+ 2
14 years ago ohhh i didnt want poonam apoorva to get ousted so soon:(

+ 5
14 years ago well end of ek se bad kar for me best human being on show out am so so upset i feel like crying but apu u rock no one can be better actor than u on tv u r the best.....god bless u

14 years ago oh wow!
poonam was good but apoorva wasnt a very well dancer all he did was just move and all dats all.
but harpreet i tell u isnt a very good singer!he messed up in the first performance!but second was better though!
thank God amrpali didnt get out!

+ 5
14 years ago thanks I am surprised poonam is out. apoorva was a weak dancer and did not sand a chance though.