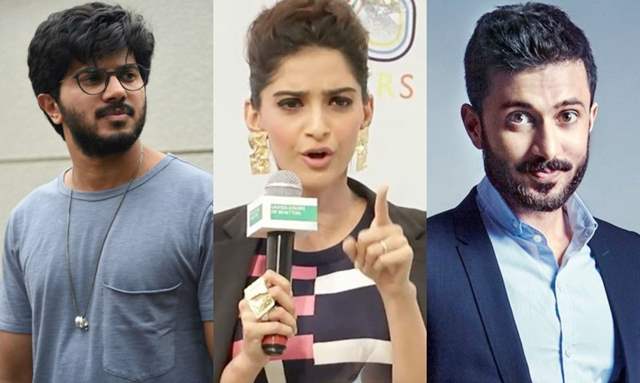 Bollywood actors Sonam Kapoor and Dulquer Salmaan will be romancing each other for the first time in their upcoming movie The Zoya Factor. Ever since Sonam revealed that she broke the tension between her and Dulquer by telling him that he can touch her to make him feel comfortable and to break the ice between the two, it is clear that the duo share a fun-filled relationship behind-the-scenes as well.

(Also Read: You Can Touch Me: Sonam said this to Dulquer to make him feel Comfortable)

During a recent interaction, as quoted by Pinkvilla, Sonam Kapoor had revealed that not only does Dulquer share great rapport with her but also with her husband Anand Ahuja. She went on the share the three of them share such a great rapport that they had formed a WhatsApp Group to keep in touch.

But here’s the catch!

The boys being boys, they removed the 34-year-old actress from the group since they only indulge in a lot of boy-talks. In an interview, Dulquer had revealed that he and Anand used to hang out during the shoot of the movie. The Malayalam actor said, “He is such a guy’s guy. He is genuinely very warm. He is very kind and easy to speak to. Even when he comes on sets, he is happy and has no issues hanging around. We made a WhatsApp group too.”

But Sonam was quick to add that she was thrown out of the WhatsApp group.

And like the humble gentleman that he is, Dulqueer explained the reason as he said that they threw her out because they had boys stuff to discuss. “Sneakers, cars and all these things that boys do,” added the 33-year-old actor.

The Zoya Factor is a film about a Rajput girl named Zoya Singh Solanki who meets the Indian Cricket Team through her job as an executive in an advertising agency and ends up becoming a lucky charm for the team in the 2010 Cricket World Cup. Eventually, Zoya falls for skipper Nikhil Khoda (played by Dulquer Salmaan) who doesn't believe in luck and superstitions.

It is based on the book by the same name, authored by Anuja Chauhan. The film is being directed by Abhishek Sharma, and Fox Star Hindi is producing it. The film is slated to release on 20th September 2019.

‘Ready For A Baby’, Sonam Has The Most Savage Reply to Friend’s ...

Sonam Pens Down a Heartwarming Story Revealing Cute things about her ...

'We Always Wished for a Daughter and then You Came': Sonam's Saasu Maa ...