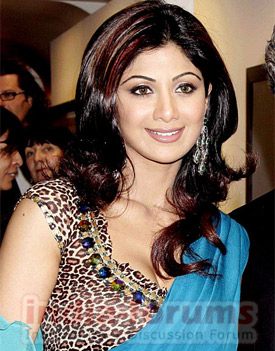 Right since the time Shilpa Shetty won "Big Brother", umpteen old associates and acquaintances are out to cash in on her international fame. Much to her annoyance, the makers of her 2005 superhit Kannada film "Auto Shankar" have gone ahead and dubbed the movie in Hindi without so much as informing her. Add to that, they have kept the title of the Hindi version a rather amusing "Shilpa the Big Don".

"Shilpa was shocked to see the posters and advertisements of the film published in film trade magazines, as she wasn't even aware that the film had been dubbed," said her publicist Dale Bhagwagar.

What caused more shock and embarrassment to the actress was the Hindi version's title. "Yes, she does play a lady don in the film. In fact, during the film's release two years ago, she had even described her character an ode to Gabbar Singh. But "Shilpa the Big Don" seems to be just an amusing attempt to cash in on her "Big Brother" win," Bhagwagar added.

The Kannada blockbuster, directed by D. Rajendar Babu, also stars southern superstar Upendra along with actresses Radhika and Sudharani. The movie was filmed at a variety of locations including Austria, Finland , the Bangalore Palace and the Mysore Lamps Factory. It is the story of a middle-class auto rickshaw driver named Shankar. Shilpa, who plays a money-lender and a lady don, is portrayed as a boorish character. She is unscrupulous in recovering loans given to the poor and designs crude methods to recover money. But in the end, she learns a lesson that reforms her. She makes amends and falls in love with Shankar.

Apparently, Shilpa's role in the film earned her the name "The new Gabbar Singh" in the South. Earlier, the movie had sparked off a controversy when a Madurai-based lawyer had filed an obscenity case against Shetty for a "vulgar" photograph from the film. Guess, its time Shilpa drags the makers of "Shilpa the Big Don" to court now.