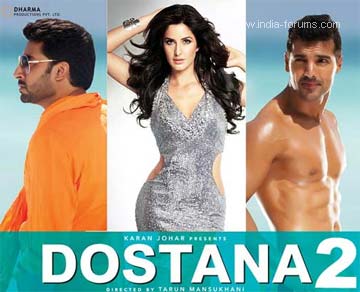 Director Tarun Mansukhani has reportedly cracked the plot and finally "Dostana 2" is set to roll in the middle of the year. The film is said to be far more naughty and wicked and John Abraham says he can't wait to get cosy with Abhishek Bachchan on the screen again.

"Yes, Tarun Mansukhani has finally got the plot in place. And we're all set. I maintain Abhishek is my best screen-jodi. And I can't wait to get cosy with him on screen," said John, who featured in the part one with Abhishek in "Dostana".

The sequel to the successful 2008 comedy would be set in two continents and would play on the gay-versus-straight theme far more aggressively.

Not willing to divulge too many details, John let out, "'Dostana 2' would be set in London and Punjab."

The sequel won't go anywhere near beaches and bikini babes either.

"The Californian seaside setting of 'Dostana' took care of all the water-related activities. 'Dostana 2' would unfold on terra firma. No beaches and, sorry, no John in dangerously low-waist swimming trunks. The cracks, if any, would show elsewhere," said a source.

The idea this time is to turn the tables on the principal actors. John would appear fully clothed and Abhishek, we hear, just might be going bare-chested for the sequel.

"The sequel is going to be far more naughty and wicked. There'll be lots of sexual jokes, though Karan Johar and Tarun Mansukhani would make sure that the gay community would not get offended. Innocuous fun would still be the key," said another source.