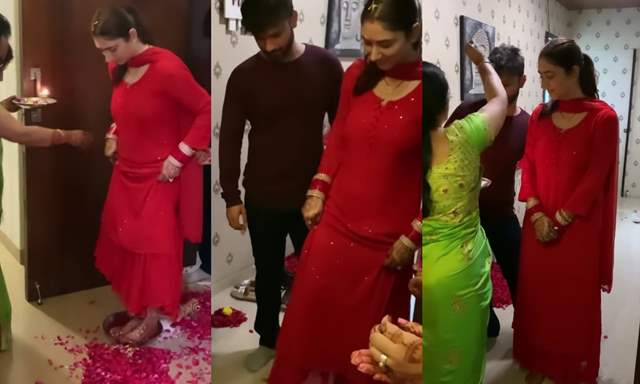 Newlyweds Rahul Vaidya and Disha Parmar's video from the 'griha pravesh' ceremony has been doing the rounds on social media and fans are gushing over the two. Rahul shared a reel on Instagram as his family welcomed Disha home. While Rahul is dressed in casuals, Disha looked pretty and made for a beautiful newlywed in a red salwar-suit.

Rahul's mother welcomed her home with the rituals that are followed, including a pooja and the 'kalash' filled with rice, among other things. They were also showed with rose petals and the song playing in the background is 'Man magan' in the video the singer shared. She also walked through a path adorned with rose petals as she stepped in.

Rahul and Disha got married on July 16 in what seemed to be a small affair followed by a reception and a sangeet ceremony a day later. The two also released their song, Matthe Te Chamkan, and it was a perfect wedding song with beautiful visuals of the couple and everyone who was there.

Attending the couple's post-wedding function were a bunch of friends as well as colleagues from the industry like Eijaz Khan, Anushka Sen, Shweta Tiwari, Arjun Bijlani, and more. On the work front, Rahul is currently being seen in Khatron Ke Khiladi 11, while Disha is looking forward to a nice project.