The controversy started during the elimination shoot, with Sanjeevani questioning the integrity of the judge Shabana Azmi. As part of the audio visual shown during the elimination process, Sanjeevni was filmed saying that Shabana Azmi is biased towards certain participants like Sachin and Roshni and that Shekhar - her student was not getting the recognition he deserves. 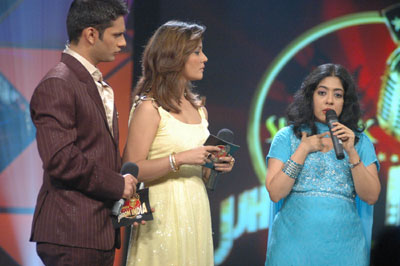 Featured Video
Also she picked up a very valid point being ignored in the show – Ratings or recognitions for the mentor, more because the show concept is of Guru Shishya. Sanjeevani when queried had a different story to tell. “Reality shows have a habit of always adding some extra reality bites to make the show more interesting. I said few things which were distorted; they were edited and only certain sentences were shown, put together. I have always maintained one strong point. Jhoom India has a very unique concept of Guru-Shishya where the singer will groom the non singer. But the judges were coming there, and giving marks looking at the performance. The grooming aspect is being completely ignored. This is what I was trying to point out, but at the end, the actual issue got blurred, and only those bits and pieces shown, became the major issue. And how can Shabanaji know about this grooming process when she was not even there on the show past few weeks?”, argues Sanjeevani.

Chhavi too expressed her confusion on the show about criteria for giving marks, and if the jury remembers previous performances – especially Shabana Azmi. On asking Chavi, she had a bit different to say about the Sanjeevani-Shabanaji argument. “Sanjeevani was trying to make a valid point, but I guess she could have probably used a different approach to put her point across. The judges were really taken aback with her argument; she started it somewhere and ended it somewhere”, says Chhavi. So what about the actual issue? “Sanjeevani’s point of argument was that, the judges should grade the mentors too, on the way they groom their contestants. If a contestant shows great improvement, then the credit should go to the mentor. I too accept this point; I wanted to know whether Shabanaji who was out of the country for the past few weeks, has a track of the growth of the jodis. Also, I wanted to know how the judges actually rate the performances, as I was really confused. Shabanaji accepted my query graciously, and explained that she has kept track of their previous performances.” 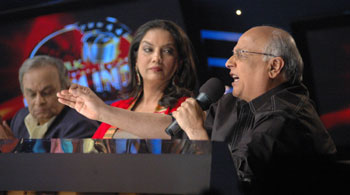 Enraged by the way Sanjeevni argued and blurted out at Shabanaji, it is said that the judges were really aghast, and Mahesh Bhatt actually staged a walk out from the show. According to Chavi, she has cleared out things with Shabana Azmi. “All’s well that ends well for me. I feel that at the end of the day, I am glad that I opened up. As they say, after a heated argument, things change, and we get closer to the other person. In the same way, I feel I have gotten close to the judges”, says Chhavi in a alm tone. Sanjeevani too maintains that she and Shabana Azmi had a chat after the controversy on the sets itself, and everything is now fine between them.

The big question that arises is – How far is it correct to question the integrity of the judges, especially when they are providing the criticisms for the improvement of the contestants? Also, keeping aside the way in which Sanjeevani put across her views, the point raised by her really needs to be addressed now. Is it fair on part of the judges' to sideline the basic concept of this show, and keep the mentors wanting and craving for more, even after they have put in so much of effort to groom a non-singer? We guess, more of thinking and pondering needs to go into this issue, so that things get resolved in this reality show...

14 years ago Aaaah Shahrukh! i can only drool over him! lolz ;p

14 years ago He identifies very strongly with Genghis Khan, Hitler and Napoleon Bonaparte.

14 years ago very gud point raised.
Jjhoom India looked gr8 whn started, but has so much drama and artificiality tht i have stopped watching it