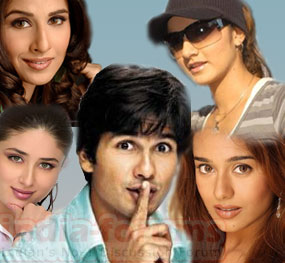 Featured Video
ith Kareena Kapoor. Where his ex girl friend has gone on to mingle with Saif Ali Khan; Shahid is believed to be juggling with link ups. First entered blockbuster Vivah co-star Amrita Rao. Their excellent on screen chemistry seemed to have something to do with their off screen “friendship”.

As soon as this rumor faded, came in another story involving Vidya Balan who is playing Shahid’s leading lady in his upcoming movie Kismet Connection. This rumor however is baseless and looked as a publicity stint for the movie.

The New Year for the Ishq Vishq actor starts with yet another link up. It is believed that Shahid and the Indian Tennis Star Sania Mirza is a couple. They were seen together at ’s Windsor Sheraton. Shahid was in the city to perform at a film award ceremony. The actor headed to another five star hotel after his performance where he met up with Sania. Sources say that the two behaved very much like a couple. Shahid’s friends confirmed his “friendship” with the tennis star. Is Sania the girl for Shahid??

If this story has any truth or not, We will have to wait and hear from Shahid himself.