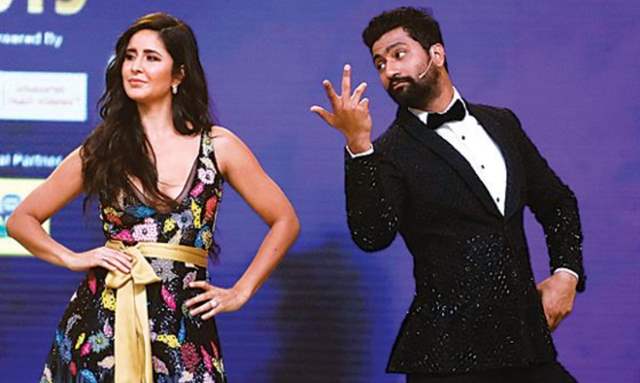 The rumors of Katrina Kaif and Vicky Kaushal have been making the rounds on the internet for some time now. As always, it started with Karan Johar’s talk show where Kat said that she would love to work with Vicky and they would look good together.

Kat’s statement spread like a wildfire and now the fans have been waiting for them to confirm their relationship. But owing to Vicky, the actor had said that dating was a 'beautiful feeling'. However, when prodded about her, he clammed up and maintained that he would like to keep his personal life away from the media glare.

Last year, Vicky-Katrina were spotted celebration Diwali together, recently she was also seen attending the special screening of Vicky Kaushal’s latest release Bhoot – Part One: The Haunted Ship. Although their acquaintance wasn’t limited there, the URI actor was also seen visiting Kat’s house at night and reportedly the neighbors had seen him trying to hide under a Hoodie.

In an interview with Mid-Day, Vicky had said, “There are no cons to dating. It’s a beautiful feeling.” However, he chose to remain tight-lipped when he was asked about his relationship with rumored girlfriend Katrina.

Vicky clearly understands the nature of Paparazzi’s job and said that while the interest in celebrities’ personal lives was understandable, it was their choice to reveal what they wanted to.

I understand that the paps are doing their job. I also understand that people have an interest in our personal lives, by the virtue of us being public figures. That’s fair. But it’s completely up to me if I wish to share. I am not comfortable opening up my personal life for discussion. It’s important to me that I guard the good things.

On the work front, Vicky was seen in Bhanu Pratap Singh’s Bhoot – Part One: The Haunted Ship, which marks his entry into the horror genre. Furthermore, he is working for the Sardar Udham Singh biopic directed by Shoojit Sircar, Meghna Gulzar’s biopic of Field Marshal Sam Manekshaw and Karan Johar’s Takht in the pipeline.

Rhea & Brother Exit After 2nd Round of ED Interrogation ...
10 hours ago