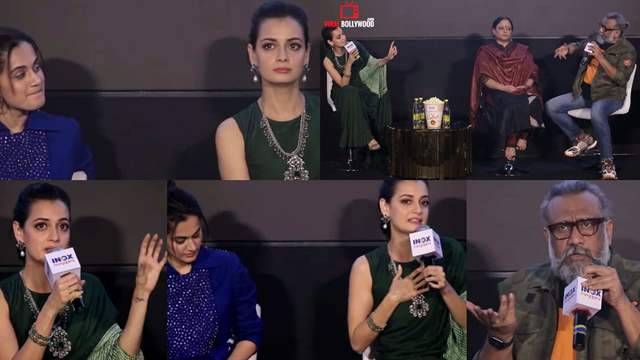 Taapsee Pannu's upcoming film, Thappad directed by Anubhav Sinha has been making all the right noises since the launch of its trailer. The actor-filmmaker jodi, after delivering thought proving films, is back with a film that highlights yet another hard-hitting topic, the damage done by "just one slap" in a relationship. The movie is based on domestic violence and revolves around a woman who reevaluates her marriage after her husband slaps her in the face in front of a group of people at a party.

Ahead of the film's release, that scheduled for February 28, 2020, a special screening followed by a panel discussion. The entire cast of the film, Taapsee Paanu, Pavail Gulati, Dia Mirza, Tanvi Azmi, director Anubhav Sinha, writer Mrunmayee Lagoo were present and the discussion was helmed by acclaimed filmmaker Anurag Kashyap.

Since Taapsee is playing a housewife in the film, a reporter questioned the cast whether while writing the script did it ever came on their mind to show Taapsee as a working woman instead of a housewife? To this, Anubhav Sinha said, "Some people choose to be a housewife and be a very happy housewife. Amrita (Taapsee's character) was a happy housewife."

Dia Mirza said, "Housewives are also called as homemakers. It is such a valuable job. It is time that we stop calling them housewives. We can call them homemakers." The director cutting off Dia further said, "That is also a trap. Fraud that has happened with a woman that patriarchy has inflicted upon them." Then Dia Mirza cut him off and said, "If a woman is making her choice, it is her choice and we have to respect that also." Taapsee who was sitting beside Dia tried to calm the actress and then Anubhav said, "I am saying something else."

He further said, "Patriarchy has inflicted such immense fraud upon women, that you are a Goddess. You have more tolerance. It is your responsibility to save the house. You are being fooled." Dia continued to say, "A man can also be a homemaker."

Talking about Thappad, the movie has been given the U certificate by CBFC and that too, without any cuts.

Meet the On-screen Mother of Sana Sayyad in Star Plus' ...
26 minutes ago

Rhea's Lawyer Dismisses Her Being 'Missing' Allegations; ...
34 minutes ago