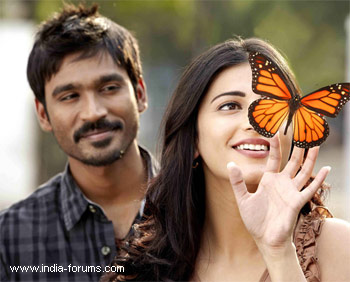 Tamil star Dhanush is upset with reports that his father-in-law, the legendary Rajinikanth, is reimbursing the Telugu distributor's revenue losses for his movie "3".

Dhanush, who became a sensation across the country with his song "Kolaveri di", is married to Rajinikanth's daughter Aishwarya, who has directed "3".

"How I love the stories that are created just because I am married to a particular person's daughter," said Dhanush.

"'3' has suffered no losses. And even if there are losses to be compensated for, god has been kind to me. I can take care of my own financial liabilities, thank you very much," he added.

The Hindi version of '3' will be released next month, and it also features Kamal Haasan's daughter Shruti, who is yet to establish a good foothold in Bollywood.

The protective father and the movie enthusiast in Kamal feels "3" could do good to the Hindi film careers of Dhanush and Shruti, provided it is edited well, especially in the second half.

Dhanush, who has been painstakingly working on the Hindi version of "3", has perhaps decided to take Kamal's advice seriously.

"The film has gone into serious re-editing. Most experts feel '3' didn't work to its optimum level at the Tamil and Telugu box office because of its inordinate length," said a source close to the project.

"Kamalji saw the film and made suggestions as to how and where to prune down the length, specially in the second half," the source added.

Dhanush confirmed the news, saying: "Yes I am editing the film down further. Kamal sir did see the film and was kind enough to make suggestions."