View Profile
Madhuri Dixit fans may want to hold on to their seats before reading this one! After her memorable stint in the judges panel of Sony Entertainment's popular dance show, Jhalak Dikhla Ja, this beauty queen is reportedly all set to make her comeback on the big screen as well!
Aishwarya Rai, who had almost been finalized to step into the shoes of Hema Malini in the rem 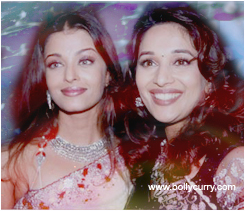 ake of the widely loved classic Satte Pe Satta, is said to have been replaced by the dancing diva, Madhuri Dixit. Satte Pe Satta  will see Madhuri starring opposite Sanjay Dutt after over a decade. The two have, together, charmed audiences in the earlier years of their careers with blockbusters such as 'Saajan'  and 'Khalnayak'.
Soham Shah, who will be directing this film, is apparently extremely thrilled to have Madhuri on board. We hear Shah's first choice for this movie had always been the 90's superstar, but was apprehensive in offering her Hemaji's role given that Mads is known to be selective about giving her nod to any script. But with Madhuri's instant approval of this much anticipated film, the movie is gearing up to hit the floors soon.
We wish this film a speedy and successful trip through the production process, since its success beyond, at the B.O., needs no help at all! Welcome back Madhuri!