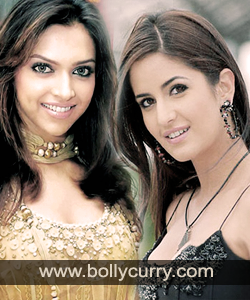 Actresses Deepika Padukone and Katrina Kaif have found yet another ground to pursue their rivalry. The two beautiful ladies have had a cold relation, previously, over the Ranbir Kapoor controversy. During the estrangement phase of ex couple Ranbir and Deepika, there was much buzz of alleged romantic alliance between the then co-stars and instant mates Kat and Ranbir. It led to differences between the ladies, which eventually never found a resolution.

This time however, the tussle is purely professional. It  stems from the bid for protagonist's role opposite Akshay Kumar in upcoming venture Joker. Apparently, both are competing in a race to star in this movie with Action Akki.
The upcoming film Joker is going to be a joint film by Akshay's home production, Hari Om, and Farah and Shirish's Three's Company.
There seems to be some kind of mis-communication which has led both the actresses to believe that they are respectively playing the lead for the film; and it doesn't help the cause that neither is aware of the other's chances to bag the same role.

Uh, oh. This puts Akshay in a very difficult position doesn't it?
It is well known that professionally, and personally, Akshay shares a cordial bonding with both actresses, and would hence want to disappoint neither.
Co-producer Shirish is choosing to stay out from all the mess, while maintaining that the hunt for a lead is still on. Since no one is finalized yet, the dilemma stands.
While Katrina and Akshay have starred together in several blockbusters - Singh Is Kinng, Namaste London, Welcome, Blue... to name a few; DP was seen with the actor in Chandani Chowk To China, and more recently, the 2010 release Houseful, both of which have failed to impress significantly at BO.

Keeping stats in mind, and fan demands - we wonder who the wiser choice shall be?!