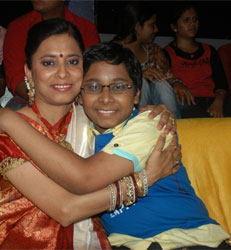 The original international format called Quincinearo demanded that the mother of the child, who lands in danger zone, will have to do some dares besides facing a musical face off to save their respective wards from elimination. Certain dares which make the mothers face their own fears have been shot as well.

But now according to anchor Akruti Kakkar, "Given the cultural sensibilities, that part has been dropped and now the mothers will only have to sing to save their kids."

"The reason that the dares were incorporated in the show format in the first place was to show the level (out of love) a mother can go to save her child. But again as Indians might not have accepted mothers' doing things that they are not comfortable with, the channel took the above call", explains Akruti.

Producer, Fazilla Allana, SOL on her part agrees that certain dares have been shot. But added that, "They have yet to take a call on whether to dump that segment or have it. We are still studying and test marketing the process, as in India a number of other things have to be taken into consideration as well. However she clarified that the dares were not supposed to be part of the elimination process which will have the mother of the child with the least marking in the bottom three to challenge the mother of the one of the two other kids in the danger zone for a musical face off".

When we contacted the channel we just got a one line answer which says that the format will remain the same.

yipee 11 years ago they better do away with dares...stupid idea

-AMIGAIL-LOVER- 11 years ago SP is mad and they are finished now after being rude to their shows which tehy talked off now sp is finished and channels like colors and imagine have beated sp! sp i finished tehy was so rude to others now its their turn to taste what they did!

gawker 11 years ago whatever torments the child the least is the best. no child wants to see mummy stressed. the segment is best left out.