View Profile
2010 saw one of it's biggest and most successful release in the Khan brothers' home production, and Arbaaz's personal directo 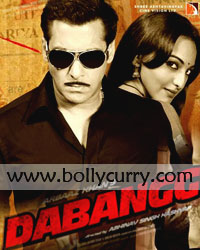 rial debut, Dabaang. However, the movie does not only acclaim itself as the second biggest grosser of the year but as far as cash counter collections are concerned, the paisa vasool entertainer also currently stands third in line on the all time list!
One proof of its mega success are the Big Star Entertainment Awards which took place on the 21st of December, in Mumbai. The whole case and crew associated with the movie managed to bag a whooping number of five awards! The list goes like this,
Best Actor: Salman Khan
Best Director: Abhinav Singh Kashyap
Best Entertaining Song: Munni Badnaam Hui
Best Male Singer: Rahet Fateh Ali Khan [Tera Mast Mast Do Nain]
Best Film: Dabaang.
The award function is set to air on New Years Eve.
43 Likes