Monsoon has arrived and has brought with itself the season of love. Staying tuned into the season, we bring to you this month a couple who epitomizes love - Aishwarya Rai Bachchan and Abhishek Bachchan. Rai is the beauty who entranced the world, won Miss World Pageant and turned out to be one of the superstars of Bollywood. Bachchan on the other hand is the Prince of Bollywood, son of the legendary actors Amitabh Bachchan and Jaya Bachchan. Thus when this duo came together, their couple looked right out of fairy tale, not any less than a royal couple. 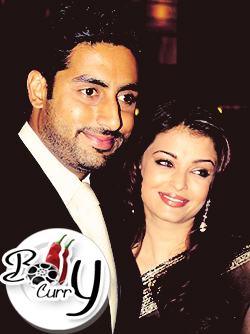 Rai and Bachchan's friendship goes way back to August 1997 when Bobby Deol introduced them to each other. Around that time, Rai was in Switzerland with Deol to shoot for her first film in Bollywood, Aur Pyaar Ho Gaya. The attraction didn't pick up pace and both of them parted ways.
The duo next came to work together in movies including Dhai Akshar Prem Ke (2000) and Kuch Naa Kaho (2003) all the time continuing to be good friends. But as they say, que sera sera - when two people are destined to be together, they will get together. Rumour mills have it that romance brewed between the two on the sets of Bunty Aur Babli (2005) where Rai shot for the item song "Kajra Re" which went on to become the biggest hit of the year.
The couple kept a low profile about any interaction given their respective bitter break-ups, but the attraction was strong enough not to evade the eyes of others.
Working together for Umrao Jaan in 2006 brought the duo face to face for a longer period. Their love story took off then continued on the sets of Dhoom 2 (2006) and Guru (2007) as well. This was the time when romance was at its peak and love blossomed between the two.
But the lovers were not to be united with ease, until and unless their love suffered hardships and troubles. If Rai's planets hadn't created enough trouble already, to add insult to injury, the kiss between Rai and co-actor Hrithik Roshan in Dhoom 2 had earned Bachchan family's disapproval. Despite all said and done, finally after the premiere of Guru in New York, the Prince of Bollywood proposed to his Beauty and they embarked on the journey of being bound to each other for eternity.
The two got married on 20th April 2007 and have completed 7 years of matrimony this year. Their wedding was a lavish affair, suitable for the royal couple of Bollywood. The year 2011 blessed the couple with a lovely daughter Aaradhya, who has now become a darling to the whole country.
After marriage, they worked together in only two movie - Sarkar Raj (2008) and Raavan (2010) out of which the former was a critical success, while the later bombed both commercially and critically. It is said that the couple have given successful movies only when they were not paired opposite each other, whether they worked together in the film or not. These comments aside, they are often referred to as the Bollywood industry's Brad Pitt and Angelina Jolie. Recently, rumours did rounds of the relationship treading on rough waters and a possible divorce. But Bachchan came out in the open and laughed off the news denying all parts of it.
Even after so many years, the couple continues to rule the media and the hearts of their fans with their charismatic presence and power packed performances. BollyCurry wishes the couple success in all their upcoming projects and hopes to keep seeing more of their magnificent union.
Writer: Kalpana K.C. and Pooja B.
Editors: Pooja B. and Sonia R.
Graphics: Komal P.


Have a suggestion or comment for BollyCurry? Drop us a PM at BC_Dropbox today.