Here is some good news for Mithun Chakraborty fans as well as those who prefer hilarious comedies on the celluloid. After a long break, Mithun is back in a stellar role in ‘Don Muthuswami’ The film shot under the banner of Samanta Movies Pvt Ltd is being presented by Shakti Samanta and directed by his son Asim Samanta. In addition to Mithun, the star cast of the film includes Hrishta Bhatt, Rohit Roy, Mohit Raina and Anusmriti. The music for the film has been scored by Anu Mallik.

‘Don Muthuswami’ promises to kill the audience with laughter unless they cry for mercy! It’s a comedy flick which presents the Mumbai underworld of the early 70s with dons dominating all around. And Mithun Chakraborty portrays the role of one such don. The storyline of the film is as follows: 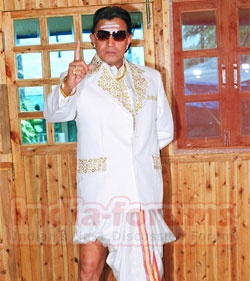 Muthuswami's father is on his deathbed and Muthu comes to see him and pay his last respect. As he comes close to his father, his father slaps Muthu and tells him that he has brought shame to the family by being a gangster and that he would die an unhappy man. The don asks his father what he could do to bring his father peace in his last moments. His father extracts a promise from Muthu that he would go straight. Thus, begins the ‘drama of don’ trying to transform into a gentleman.

Next, Muthu tells his henchmen to continue working for him, but now instead of being gangsters they have to work as domestic helps. He engages an Urdu/Hindi teacher Jaikishan (Mohit Raina) to improve his language and commences his journey to transform from ‘Don Muthuswami’ to ‘Sir Muthuswami’.

The storyline takes a twist when it is time to get ‘Sir Muthuswami’s’ daughter Sanjana (Hrishita Bhatt) married. While Muthu considers his very good friend ‘Don Vardhan's’ son Pradhan to be the best match for Sanjana, the girl refuses to oblige. To avoid marriage, Sanjana lies that she is pregnant. Muthu's general manager, Preetam (Rohit Roy), who wants to marry Muthu's daughter, is another dimension of this comic confusion. He had been stealing regularly from Muthu, to become a millionaire.

The confusion enhances when Ranjana (Anusmriti) tells Muthu that she loves his accountant Preetam. She also admits to Muthu that she had lied to Preetam about being Muthu's daughter. In the meanwhile, Sanjana and Jaikishan fall in love with each other and make things more complicated.

How does Muthu get back the loot from Preetam? Who is the father of Sanjana's baby? Who marries whom? Who Is Ranjana? What happens to the rival gangsters? How does Don Muthuswami handle the police? If all these make you curious, wait for and watch "Don Muthuswami". And needless to say, Mithun Chakraborty gives another classic performance in the film. -(SAMPURN)