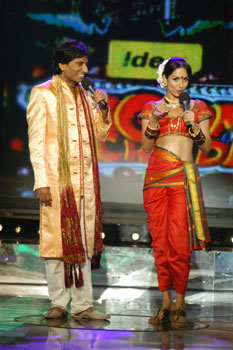 Idea Dhoom Macha De celebrates the colors and traditions of India this week! Watch a special episode wherein your favorite singing superstars Richa, Baba, Jassi, Babul, Jaspinder, Kamaal and Devang will showcase melodious performances on folk songs, from the state they belong to! Tune in to this episode titled “Colours of India” this Friday at 8:30 pm only on NDTV Imagine!

Stand-up comedian Raju Shrivastav makes a special visit to co-host the show along with Malaika. With Raju’s wise cracks and some soul stirring performances by the artists on popular folk songs this episode is sure to leave the audiences asking for more!

Watch Kamaal surprise the judges as he performs on Chalat Musafir Moh Liyo Re in true Bihari style! Devang has the audience swaying as he sings Gujarati folk songs like Sanedo and Halo Saamro. Jaspinder, Baba and Jassi stick to their Punjabi roots as they dish out some heartwarming performances on songs like Suniyo ji, Kesariya Balam, Kurti Malmal Di, Pallo Latke, Mirza and Gori Mere Gaon Ki! Watch some splendid performances by Babul and Richa on songs like Shadher Lao Bonailo, More Bopiragi and Ni Mein Kamli Yaar Di! In their unique style, they leave the audiences overwhelmed in this unique episode!

So tune in to this special episode titled “Colours of India” and watch some heartwarming performances by these seven singing superstars this Friday, March 21st, at 8:30 p.m. only on Idea Dhoom Macha De on NDTV Imagine!
Featured Video