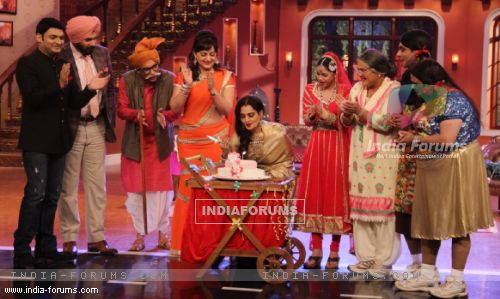 Colors' Comedy Nights with Kapil is well known to bring in television as well as Bollywood actors, singers as well as the musicians on the sets for special appearance where their fans get to interact with each other on one on one basis. The show is one of its kind in comedy genre to when it comes to bringing in clean comedy.
Well, this weekend the viewers will get to see the evergreen, the ever beautiful Rekha on the sets of Comedy Nights with Kapil where she had come to promote her upcoming movie Super Nani. It is the very first time that Rekha will be seen making an appearance on a television show.
Also co-incidentally, Rekha's birthday fall on the same date of the show's airing date. It is October 10 when Rekha celebrates her birthday and CNWK will air over the weekend on 11th and 12th. Keeping this co-incidence in mind, the team of CNWK thought of celebrating her birthday and making her appearance more memorable.
Well truly, Rekha's appearance with the splash of Kapil and his team's comedy will definitely be a great watch.
Keep reading this space for more updates on your favorite shows.
Upasana Patel
3 Likes

sastatoday 8 years ago the movie is average and nothing so good.

Choco.Butter 9 years ago I do not know what can i should say about rajeev ? I could not found anywhere any words to describe of this man personality .he has been proved of his self always by his hardworking .I am soo proud to be a his fan.I can't wait to watch this movie. I want to watch to soundtrack not only rajeev its really interesting ,amazing story .I will diff watch .

I love you rajeev lots

-purnima- 9 years ago It feels so good as a Fan

to hear all the praises for Rajeev

...
will try to catch movie ASAP

-Mrs.SKMehwish- 9 years ago Soundtrack is a must watch
Unique concept,mindblowing music and exceptional performances by actors constitutes its X factor.
Rajeev was damn good in the movie..i just love the way he chooses his work and never disappoint his fans.
Am Proud to be a Rajeevian..RK rules.
All the very best for your future projects my jaan
Keep Smiling..luv u

arpita25 9 years ago I really wish that this movie should work for RK in a way as he requires for his future.

Bluefalls 9 years ago Soundtrack is surely a movie to look out for this friday!!! And Rajeev khandelwal did it again...he is flawless as DJ Raunak Kaul ...The hat-trick sounds exactly right for him :)

soulstarspirit 9 years ago Soundtrack is a must watch
Unique concept,mindblowing music and exceptional performances by actors constitutes its X factor.
Rajeev was damn good in the movie..i just love the way he chooses his work and never disappoint his fans.
Am Proud to be a Rajeevian..RK rules.
All the very best for your future projects my jaan
Keep Smiling..luv u