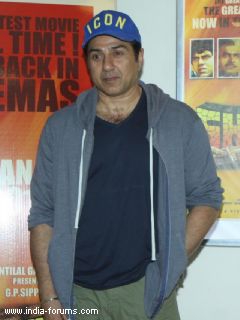 Over his film career, Sunny Deol has been recognised as the 'action hero' with the 'dhai kilo ka haath', but the actor says these are merely tags, which he can do nothing about.

"My persona has become such because of the films, but I am not like that in real life," the soft-spoken Sunny said here.

"I don't like tags like action hero and 'dhai kilo ka haath', but we (actors) can't do anything. The characters that I had portrayed were strong, so maybe because of that (I have been given these tags)," added the 50-plus actor, who featured in films like "Ghayal" and "Gadar - Ek Pram Katha".

Sunny, son of veteran actor Dharmendra, usually shies from extensive film promotions. He believes that a film's business is not dependent on publicity.

"A film doesn't run because of publicity. You must only spread awareness (about the film), and at the end of the day, your trailer should be interesting. You never know the taste of audience. If they (audience) like it, then the film will run," he said.