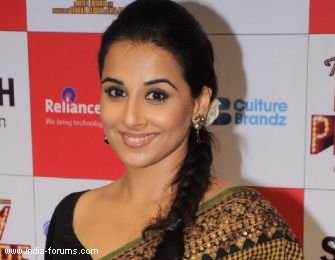 The charm of handspun saris like the benarasi, kanjeevaram and chanderi has almost faded, but designers like Sabyasachi Mukherjee and Ritu Kumar feel that actresses - Vidya Balan in particular - can play a key role in reviving the traditional Indian six-yard wonder.

While most B-town actresses step out in gowns, designer dresses and even saris made of net, georgette and chiffon, Vidya flaunts ethnic weaves and fabrics, helping her stand out.

"I think there are just a few actresses who are trying kanjeevaram saris and the list includes Vidya Balan, Rekha and some veterans. I want young girls to understand that dignity makes them better stars rather than exposing their body," Mukherjee, whose creations are dominated by ethnic Indian weaves, told IANS.

He feels Vidya's newfound fame can single-handedly bring hand-woven saris back in vogue.

"I feel proud that Vidya chooses my creations for most of her events. Keeping her success rate in mind, I'm sure she will bring back the hand-woven sari era. For me, Western wear is not a sustainable market as it lacks mass appeal because most Indian girls are voluminous. Western clothes are good for a multiplex audience, not for a simple Indian girl. It's time to make pan-India clothes," he said.

He is right as the leading ladies of Indian cinema play a major role in starting a trend. Rani Mukerji's colourful kurtis and pyjamas in "Bunty Aur Babli" or Kareena Kapoor's t-shirt and patiala salwar in "Jab We met" were instantly copied by the masses.

Now Vidya is creating a stir with her traditional sari look.

Just like Mukherjee, she too feels that with the help of Bollywood, things can change.

"Nowadays synthetics have became an important part in every woman's wardrobe and the kanjeevaram is sidelined. I hope with Vidya Balan reviving hand-woven and khadi textiles, a new trend will emerge in the form of kanjeevaram and silk saris. The Indian figure looks best in traditional Indian saris and it's very important for girls to realise that," she said.

It is felt that the influence of Western markets is so strong that girls prefer stepping out in the Little Black Dress (LBD), free-flowing gowns and maxi dresses. Some try Indian wear, but the choice of fabric is restricted to net, georgette and chiffon.

As the demand for traditional saris has declined, many weavers in India have been forced to change their profession or are living in penury. Kumar feels awareness should be created about dressing up in hand-spun saris.

"Be it silk or cotton, as long as it is woven, it's classic. These saris are simple, time-tested and increasingly rare, and this makes it more special. People are not aware of the options in hand-woven textiles that have the potential to look as glamorous as Western wear. They can be plain, zardozi, gota patti, phulkari, bandhni or leheriya."

During the making of "3 Idiots", Aamir Khan gifted a chanderi sari to Kareena Kapoor, which was made by handloom workers of Chanderi village in Madhya Pradesh. According to Kareena, Aamir wanted her to have the sari because she is a style icon and she should promote the work of these handloom industries.

"During the promotion of '3 Idiots', Kareena chose to wear a chanderi black sari. The whole idea was to create awareness about that dying fabric. I believe that even a small contribution by these ladies can make a huge difference in uplifting such skills as people follow them," said designer Samant Chauhan.

Kanjeevaram and chanderis also grabbed the attention of Hollywood personalities like Noami Campbell and Oprah Winfrey who wore it during their respective visits to India.

"Bollywood divas are followed by commoners in every walk of life and if they can imitate the Western line, why not an Indian line? I still remember the day when Hollywood supermodel Noami Campbell walked for one of my shows in Mumbai; she deliberately wanted to wear a black chanderi sari and she did that gracefully. So, yes, a small effort can add value to people's mindset," concluded designer Madhu Jain.

(Nivedita Sharma can be contacted at nivedita.s@ians.in)

Super Dancer contestants on India's Best Dancer
a minute ago

Priyanka Chopra praises Sonu Sood as UNDP confers him with ...
13 minutes ago