For the first time probably you are playing the lead role in a movie so did you feel any kind of a pressure?

I think as an Actor there is responsibility attached to every role and performance then seeing it as pressure. If I take pressure I can't deliver my best through my performance and won't be able to do complete justice to the character. And so with the lead role there is 'greater responsibility' and not pressure in any way. 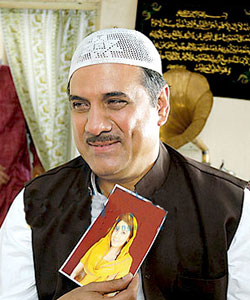 It's your first movie with Mr. Shyam Benegal so how was the experience?

I feel for a person to proclaim himself as an Actor in the true sense he/she should work with Shyam babu atleast once during his journey. It's an honor working with him.

How did u feel when Shyamji approached you for the role of Abba?

Actually all this time when I hadn't got a call from him I was under the impression that may be he doesn't regard me as a good actor. But his first statement after approaching me that, "Boman I have finally found a role to suit you" all my misunderstandings were just washed out in no time. I was amazed and equally honored to here that from a renowned director like Shyamji.

How difficult or easy was it to relate with the character Aarman Ali (Abba)?

I would say that, relating oneself to any character for that matter is never that easy. Because as an Actor I'm expected to put the soul, brain and heart of another character within me and highlight his qualities, for which I need to think, feel and behave like that character (Aarman Ali). And while doing so I also need to take care that if any quality is being detached from the character its still should appear complete in every manner. So it's never an easy task.

From your perspective how is the character of Aarman Ali?

According to me firstly he's a great representative of the common man. And secondly the portrayal of three main qualities that is simplicity, honesty and respectfulness through his character is what Aarman Ali is made up of. In the movie the situation or problem in which he gets stuck can be resembled to a person standing in quick sand and in such situation also the way he comes out of it with small ideas and sheer simplicity is something very credible.

In 3 idiot's you played the role of an intellect and now in this movie you are playing the role of an illiterate, these are two extremely contradicting characters what's your say on it?

(laughs) Frankly speaking before you passed this question to me I hadn't even thought of it. But now for that I would say that it's my duty to entertain the audience with variations in character. I was always tried my best to do diverse roles and avoid repetition for that matter I had almost declined 3 Idiots as I thought that it was much similar to the character in Main Hoon Naa. But then when we modified on it I spotted the difference and took it up.

Also in this movie you were expected to speak Dakhani language to add the Hyderabadi flavor to the character so how was the process?

It was a great experience especially for me because there was a time when I used to reject movie proposals due to my parsi accent. But with time I realized it's all just psychological and now here I am speaking Dakhani (giggles). As we were un-known about the language we were given CD's to hear the sounds and style, workshops were arranged, tutors were appointed but we got the real feel of the language only after we started communicating with the localites of Hyderabad. Also while interpreting the language through dialogues I took special care of not coping the style of the tutor and deliver it in my own voice tone.

Which were the movies for which your acting was applauded a lot and for which it was denounced?

The movies for which my performance wasn't appreciated would be Yuvvraj, Pyare Mohan. And I received applaud for obviously Munna Bhai, 3 Idiots, Khosla ka Ghosla, Don. But apart from these the roles I played in movies like Little Zizou, Darna Mana Hai and Being Cyrus are some characters I enjoyed enacting. And the movie Let's Talk had received lot of critical acclaim.

Always a humors touch is attached to most of your characters, how different is the humor in this movie?

I feel there is no humor attached to the character, it's the simplicity of Aarman Ali his simple and truthful approach towards life is something that would make people laugh. And it's a misconception that I have been doing comic role for example in Khosla Ka Ghosla it's a serious issue of a person losing his land and yet the audience laughs at it.

Photography has been your passion how frequently do you practice it these days?

Though it has been my passion and I do carry my camera everywhere but don't get much time to pursue photography. It's like when I wasn't acting I was doing photography and now it's vice versa.

Some of the legendary people who inspire you?

JRD Tata, Mr. Kalam and truly inspired by Mahatma Gandhi. Director's with whom you wish to work in future? I would like to work with Santoshji, Prakash Jha and many more.

What is your dream role?

Which are your upcoming movies?

Housefull, Banda yeh Bindass hai, Crooked and we haven't yet started shooting for Dostana2 and Don2.

We wish all the luck for the movie Well done Abba to be released on 26th March.

Tiger Shroff shares his experience on receiving ...
38 minutes ago