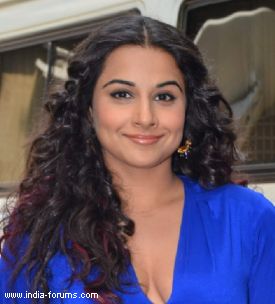 Vidya Balan is not concerned about the horde of detective films being made currently like "Jagga Jasoos" and "Byomkesh Bakshi". The actress says that her film "Bobby Jasoos" has something more to offer.

Vidya says she is not looking at other films as competition.

"It's a female detective film but it's not just a detective film, it's a human story. I am not thinking of how different we are going to be because I don't think of other films. I am sure each film will be unique," the 34-year-old said here Friday at a radio station where she was present to promote her upcoming film "Shaadi Ke Side Effects."

While comedy-mystery "Jagga Jasoos" is a joint venture between director Anurag Basu and actor Ranbir Kapoor starring the latter in the lead, "Detective Byomkesh Bakshi" stars Sushant Singh Rajput and is being directed by Dibakar Banerjee.

"Bobby Jasoos" has been produced under Dia Mirza's as well as businessman Sahil Sangha's banner Born Free Entertainment and Vidya says the producers created a wonderful environment on the sets.

"'Bobby Jasoos' was great fun. We completed the film in 51 days flat in Hyderabad. Dia Mirza and Sahil Sangha created an environment where everyone felt like they were contributing, they felt an ownership towards the film and we have all tried to do our best," said Vidya.