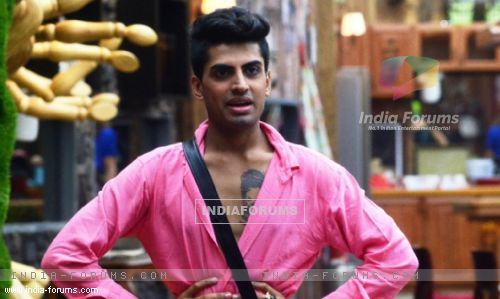 Colors Bigg Boss 8 is all known for its family drama, love - hate relationships and manipulations between the inmates locked in the house. TellyBuzz makes sure that we update our readers with all possible twists and drama that will be showcased in the show.

As it will be shown today that the house will be divided into the Lamba family and the Babbar family where the one of the family had to unit Sonali Raut and Upen Patel and the other had to make sure that they remain separate.

Well, in this fun task ordered by Bigg Boss, most of the contestants got physical which ended up hurting each other. In this luxury task given, things went out of control and all the girls of the BB08 house got into a hustle where Deepshikha Nagpal banged herself against the mirror wall in the washroom, breaking the mirror as well as her head. Deepshikha got herself hurt because of the push that she got from Karishma Tanna, Soni Singh and Natasa Stankovic.

Seeing this clash, Sushant Divgikar who is always known for his cool temper and the inmates' fondness for him, lost his temper and out spoke with everyone present.

Well, now that the game has begun in a fully fledged manner, such out bursts may not come with a surprise to the viewers.

idiscuss 6 years ago Hi, i would really like if you could discuss about the the karishma tanna and gautam scandal. and how salman khan, andy and kamya just bashed out on karishma withut any reason.