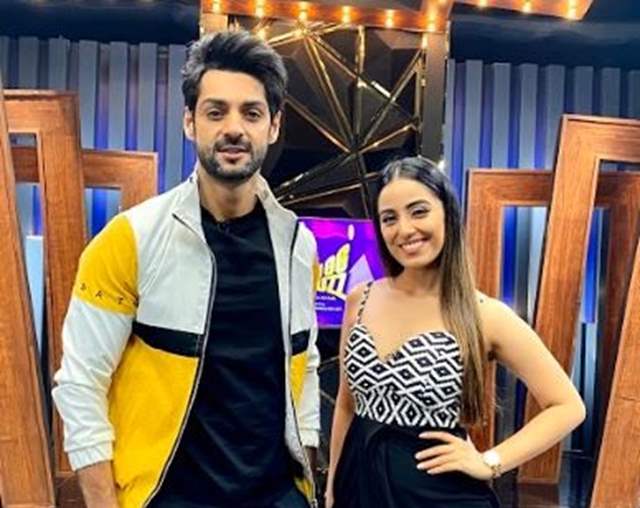 Say goodbye to your Monday Blues as Bigg Buzz #Asli fans ka Asli Adda is back with yet another exciting episode and celebrity guest to spill the beans from the BB14 house.  In the latest episode of Bigg Buzz available on Voot, host Karan Wahi indulges in a sincere conversation with former Bigg Boss contestant Srishty Rode. Srishty had walked away with a lot of positivity and bubbliness from the show. Commenting on the equation of Jaan and Nikki Srishty said, “Mujhe Jaan ki game bilkul nahi pasand . Jaan is actually like a Lota, usko jahan par bhi faik do jo bhi paani usme bhar dhega vo lota uska ho jayega.”

To add up to the excitement, Sara Gurpal, the first evictee of BB14 joined via a video call. One of the fans asked her if she would want to hang out with Nikki after the show to which he retorted saying “Aievin Hangout? No ways.”  Karan plays a thrilling game with Sara and Srishti – Match The Mohawra (Phrase) where he gives them a Mohawra and they have to name a person from the house that fits it well. According to Srishty ''Garajte badal barazte Nahi'' suits Pavitra, “Most of the times voh Garazti hai, mai phaad dungi , mai yeh kardungi vo kardungi and then she is just nothing, Muh pe bolti hee nahi”. Furthermore her opinion on Rahul and Eijaz was, “Na Ghar ke nah Ghat ke cause unki nah koi apne ban rahe hai nah voh ghar mai doosri team main jaa pa rahe hai.”

After being eliminated from the BB14 house, Naina joins Karan, where she talks about her ‘New friend Nikki Tamboli’ – “Chahe vo acha khele ya bura khele, jeetne ke liye kaise bhi khelegi. I really like her cause she’s cute, bubbly, masti karti hain, uske bahut saare shades hai, uska simple funda hai usse show jeetna hai which is fair”.  She added that Eijaz’s every move is pre-decided and he is the dirtiest player inside the house.  She commented that while Rubina, Jasmin, and Abhinav are the most trustworthy people inside the house, Nikki is the really entertaining one. According to her, Rahul, Nikki, Eijaz, Jasmin, and Rubina would be the top 5, which Rubina emerging to be the winner of the show. In an explosive end to the episode, she predicted that the next contestant to be eliminated would be Jaan.