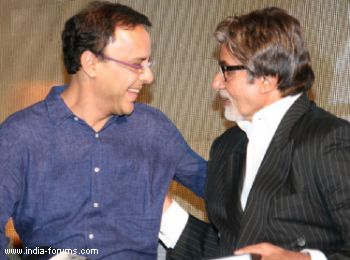 "Eklavya - The Royal Guard" was Amitabh Bachchan's first film with Vidhu Vinod Chopra. The megastar says his actress wife Jaya had warned him that the director abuses on the sets, but on the contrary he enjoyed working with him.

"When I told Jaya that I am doing a film with Vidhu Vinod Chopra, she nodded, which indicated for things to come. Later, when I told her I am going for outdoor shoot for a month, she said you will be back in three days," Amitabh told reporters here Wednesday after the screening of "Eklavya".

"Jaya told me he abuses and screams on the sets which will not suit your temperament. That's the impression that I went with for the shooting. However, the shooting took more than a month, but it was great working with Vidhu," added Big B who made his second public appearance after his surgery in February. His first appearance was at the opening ceremony of the fifth edition of Indian Premier League.

"Eklavya" was shown as part of the Vidhu Vinod Chopra Film Festival, which concluded here Wednesday. It was organised in association with PVR Cinemas to mark the completion of 30 years of Chopra's production house.

Chopra too praised Amitabh and said: "'Eklavya' was written for Amitabh Bachchan. He is one of the best human being in the film industry today."