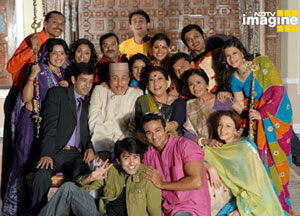 NDTV Imagine's Jasuben Jayantilal Joshi's Joint Family is closing its doors to viewers on March 28th. The JD Majethia-Aatish Kapadia show which had a huge family as its protagonist with Jasuben (Swati Chitnis) solving her family problems, started as a Monday to Thursday affair when the channel launched, and was then turned into a weekend show before finally getting wrapped up. We spoke to J.D. Majethia on why they chose to give Jasuben a decent burial…

"Like COLORS and Star Plus which are running their shows from Mondays to Fridays, NDTV Imagine wants to do the same. Jasuben was running from Fridays to Sundays. With the Hindi films being sold to TV channels for lesser prices, more and more big ticket movies are being sold to multiple channels which run them within one or two weeks of each other. Films fetch a collective viewership on a Sunday and that
positively affects the GRPs of a channel which in turn reflects positively in the TRPs. Besides, in between these films, channels run the promos of their daily shows, so that becomes in-built advertising", quips J.D.

Adding on, he says, "Now in such a scenario, it wouldn't have made sense to run Jasuben only on Saturdays. Yes, we are not completely satisfied with how Jasuben fared on the channel. It came at a time when COLORS had launched their Khatron Ke Khiladi and we all know how the channel affected the other shows then".

Talking about change seen in television, he quips "Today television has become very unpredictable and uncertain. What was on an upswing once is nowhere today. A show which did well two weeks ago today has a massive TRP drop…so it's all very uncertain. It's no longer a channel versus channel competition, its one show versus the other and that's a good sign because viewers now have a choice and they no longer have to watch a show out of habit even if it's badly made. They can switch to something else".

"It's a decent burial for Jasuben, no sweat because apart from Ramayan, it was the only show left to go off air from the first lot of shows NDTV Imagine had announced during their launch", concludes the Producer.

i wish the entire team all the best

prcns 11 years ago so sad. looks like its more dangerous to air serials on d weekend slot.

smallwonder 11 years ago will miss the show... one of the good ones...

Mrignaini 11 years ago That is unfortunate, especially since it was a better show than the ones that replaced it''s timing, like KMH and Bandini, dunno which one, but they shouldn''t have changed its timing in the 1st place.

instantkhichdi 11 years ago On 28th, probabily jasuben will air for an hour, ie 9pm to 10pm
thats why JD and Aatish might have told star to change time of BBB at 10pm-11pm slot in the last moment!
Also did u realise that last 2 weeks were the weeks when we gained max. entertainment from hats of as we had
shree
remote control
jasuben
baa bahoo
and bure bhi hum.. ie. 5 hats off shows after so many days! After 28/3 only 3 left :(

instantkhichdi 11 years ago @tomnjerry2
u r so funny.. I will miss jasuben ka chidiyaghar.. Kitna rang be ranga pyara parivaar.. Ab kabhi nahi aayega banane har din ravivar.. I fell so sad.. I hate NDTV.. I feel like crying.....please JD bhai, come with season2.
Why r u leaving it in between? Where is mananiya professor chandrakant joshi''s daughter? Purshotam''s second wife? Was it supposed to be played by vaishali..? I just cant imagine it ending in between..

Farah Khan’s Kids give her a thumbs down as she takes the ...