View Profile
Plagiarism is the trend 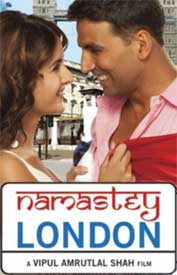 Featured Video
in our world, more often than not politely paraphrased as 'inspiration'. Multiple Hollywood films get 'remade' into Bollywood flicks and then smaller cinemas take on from there. The big hit at Box office, 'Namaste London' starring Akshay Kumar and Katrina Kaif was recently made in Bengali. The film was titled 'Poran Jay Jolaye Re' and it is said to have made collections enough to restablish the worth of its original version.


However, fame for this regional remake turned nasty. On Tuesday morning the Kolkata court ordered all profits from this film will be deposited into court. This action will cause the production company of 'Poran Jay Jolaye Re', Venkatesh Films to lose a considerable amount of money.


According to the director of 'Namaste London', Vipul Shah, this act was necessary to stop plagiarism. The acclaimed director called in a historic violation of copyright infringement. He added also, that he didn't do this for the reward but rather to keep the principles in place.


To add on, the male lead & co-producer of 'Namaste London', Akshay Kumar has decided that he will not sign any film that suggests it may be an illegal copy of another. The actor stated that his films will always be original as he believes that plagiarism is a serious offense!