Balaji Telefilms' Bandini on NDTV Imagine has showed a consistent growth in numbers from the time of its launch. And now, the show has reached new heights by being the #1 show of the channel with a TRP of 2.1 this week. 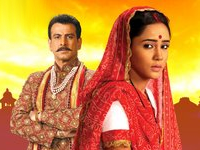 Featured Video
According to the latest ratings, NDTV Imagine stands fourth on the chart with a GRP of 108 with a gain of 15 points from last week. COLORS gets the top position with a GRP of 258 while Zee TV takes the second position ahead of Star Plus with a GRP of 245, with Star Plus having to settle for the third spot with GRP of 240.

We talked to Sandiip Sikcand, Creative Director of Bandini who quoted, "The numbers speak for our work; and this is all because of the efforts put in by the entire team. Bandini has been a baby to us, and we are devoted to the show. The show has a great potential and this is just a beginning. We have reached the 2 TRP mark, but we are confident of getting to the 3 TRP mark very soon".

On the next interesting track in the show, Sandiip said, "There will be a revelation of Dharamraj's past which will give a totally new meaning to the Santo – Dharamraj chemistry. You have to watch this story track as this is something that has not been shown on television before".

We sent a text message to Shailja Kejriwal, Exec VP Content, NDTV Imagine, but did not get a reply from her.

Well, with this continues the battle for numbers..

+ 2
13 years ago I wish they would get Shweta Tiwari to play DM's first wife!!!Then we would get to see some great flashbacks!!!!!

13 years ago hey jyoti is also doing good it has 1.4-1.5 trp the show is far more btter as realism than bandini but i love Bandini too.

13 years ago Its good going for now all the characters are good..but don't agree with the Santo and Malik story line the guy is too old for Santo his kids are older than Santo....common make me sick....i don't think they should get together...the love story between Hiten and Khemi is good i like that but how can this carry on...the dad is married to Khemi younger sister and Hiten is in love with the elder sister....and now Duggu is going to be Santo son in law....ahhhh what a Khichdi man only Eka serial can be like that good start then rubbish.....i can't grasp these story line man give us a break....i think Malik should never accept Santo as his wife given the reason above...aHHHHHHHHHHH

rojmal1 13 years ago It's A GERAT SERIAL BUT PLEASE DO SOMETHING ABOUT THE BACKGROUND MUSIC. VERY LOUD WHILE DIALOGUES ARE BEING SPOKEN THUS MISSING THEM. OTHERWISE NO COMPLAIN.

13 years ago good to know its doing well. hope they manage to keep us all interested.

13 years ago in imagine i like all the daily shows except for ramayan the concept of jyoti is really good and i know it will do much better than the other imagine shows bandini and kmh are also good but that kind of concept have been seen earlier in kasam se and kaisa yeh pyarr hain .imagine need to bring more shows in daily as well as needs to revamp its weekend slot