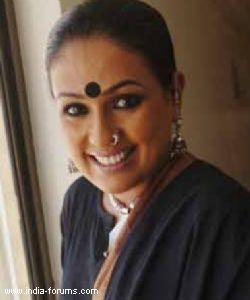 The cat eyed Ashwini Kalsekar, last seen as Mahamai in Ganga Kii Dhej, would now make a comeback with Trilogy's Hitler Didi in a new avatar.

A source informing on the same says, "Ashwini Kalsekar has been finalized to essay the lawyer who would fight for the case from Sameer's (Mrunal Jain) side. The rape case which is now in courts will find one lawyer in Ashwini Kalsekar."

When contacted, Ashwini confirms, "Though I don't know much about my character yet as I haven't started shooting for the show, all I can say is I am a lawyer and would fight for the rape case."

She would start shooting for the show from today.As reported earlier Ashwini Kalsekar would also be seen in Hats Off comedy for Life OK.

After essaying various professions before on the small screen, get ready to witness a new one!

avi_k_ 8 years ago Awesome performance. But Rishi is the best. So,he's going to win.

mahkutty 8 years ago your performance has been good... I like it.. Rani and Rishi make a good bonding! Keep it up!!!

blueocean_787 8 years ago Hitler didi the best show of t.v at 8p.m. A must watch show.
InShi rocks.

LOVE_DMG 8 years ago OMG she from the old kasam se...great actress.

avi_k_ 8 years ago Hitler didi the best show of t.v at 8p.m. A must watch show.
InShi rocks.

emyl 8 years ago this is a cool news... Hitler Didi is the best.. but hope to see better track with her entry.. :)

dotcom 8 years ago Loved u in kasam se. But I had hoped u would be lawyer from Indiras side. U would have rocked against Sameers ego. But still love to see u again.

misty85 8 years ago This track has a great potential. I hope they handle it properly. But I'm noticing that the list of bloopers are increasing which is very disheartening & Ilaji's negative approach to things is very discouraging. Please bring some positivity in show.