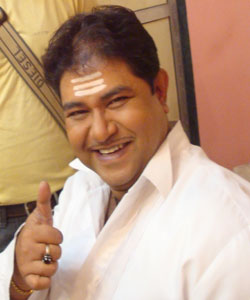 Ashiesh Roy who is essaying a cameo role of Mr.Iyer in SAB TV's comedy show Maniben.com, shares with us a unique incident that made him trash pessimism when it comes to belief in providence. And the actor credits it all to a phone call from the production house Contiloe...

Ashiesh Roy, who has recently entered the comedy show Maniben.com produced by Contiloe Films, had to cancel his long awaited road trip to Goa with friends as he had to report for the shoots.

Ashiesh was quite disheartened on canceling his last weekend's trip to Goa. However, now he heaves with a sigh of relief and tags Contiloe's last moment call for the shoot as an 'Act of God'.

The actor narrates the life-changing incident. "We were shooting at night, and I was justifiably depressed about missing out on my Goa trip. Suddenly, out of the blue, I received an SMS stating: 'Baba Nanak saw your sadness and said hard times are over. If you believe in Him, send this to 10 people. Watch what happens in the next 30 minutes.' I normally don't believe in these things, but I don't know why I actually forwarded the message to 10 of my friends. 15 minutes later, I received news that my friends who were on their way to Goa have met with a terrible road accident! Their car was smashed beyond recognition, and they were all in hospital. I could have been in the car if not for the call from Contiloe", says the visibly shaken actor.

The actor claims that he has discovered God on the sets of Maniben.com, "There is most definitely a higher power at work, no doubt about it. I'm probably alive today because of that one call. As soon as my Maniben shoot is over, I plan to go to the gurdwara and pay my respects. Then, I'm going to treat the entire Maniben.com team with sweets."

We wish him all the luck for future !