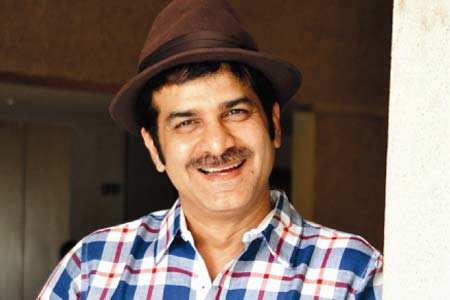 Hats Off Productions' unique alien based show  Badi Door Se Aaye Hain has completed 100 episodes and celebrated the success of their achievement by bash where the star cast enjoyed and had fun.

The man who is known for the unique concept of the show is eminent J D Majethia who has excelled in producing shows like Khichdi, Sarabhai Vs Sarabahi and acting in the show Baa Bahu Aur Baby. In this chat with us, JD talks about the excitement, acting in a comedy genre and more...
Sharing his happiness for the completion of 100 episodes J D says, "In today's era completing 100 episodes is like an achievement because nowadays  many shows are shut in a few months but it is even a more big deal if a comedy show completes 100 episodes as there is lot of competition in the market. Shows like Taarak Mehta Ka Ooltah Chashmah and Comedy Nights with Kapil has set some standards for comedy so it becomes little difficult for audience to accept new shows. When we launched Badi Door Se Aaye Hain people loved it, we have been getting fantastic ratings for the show. As a producer I feel content and happy when the hard work pays off."
Since JD Majethia has been a part of comedy genre for a long time, what difference does he find in this genre today? "If we compare today's comedy shows with the shows in early time then you will find lot of differences as earlier the shows used to be aired weekly but today they are aired daily so there are time constraints to produce a quality project. As a producer our job is to spot finest talent to make a best show."
What are JD's expectations from the show Badi Door Se...? "I feel that the show goes on and on for a long time. I think we have just taken one step and there is long way to reach the epitome of success. I feel it should at least reach 500 episodes but when the question is about comedy genre you cannot be sure about anything."
Talking about the popular show Baa Bahu Aur Baby he says, "Baa Bahu Aur Baby was a fantastic show which had its own flavor of comedy. For me the show will always have a special place in my heart."
One of your close friend Deven Bhojani is directing an upcoming show Pukar; so is JD also thinking to get into direction? He says, "I don't see myself into directing television because it requires a lot of time. I would rather prefer acting. I am looking for a right project and I will grab it as soon as we get it."
We congratulate the entire team of Badi Door Se Aye Hai for this achievement!
Phalguni Sharma
1 Likes

kooltoad 6 years ago Still watch sarabhai vs sarabhai... One of the best shows of Indian telly industry... Nothing like a classy comedy with lots of wit, humour and sarcasm and of course a crazy family...

ibelieveinpink 9 years ago CONGRATZ ON THE BABY GIRL!!!! I hope she's just as beautiful inside and out as you and Abhishek! Bless you both!!!!

nerdndproud 9 years ago congratz for the arrival of the baby angel!

ibelieveinpink 9 years ago I for one am totally psyched! Wish her a safe pregnancy and a beautiful baby!

-veena.shona- 9 years ago jst 1 quest- is Ash d 1st woman to get preggo n deliver a baby??
no na, so y so much hype abt it?
i mean, i m happy for dem, bt srsly ye kaisa news hua yar? media needs to grow up!

liza507 9 years ago Great month for Aishwarya, her kid will have the same birth month.
goo.gl/JiJa7