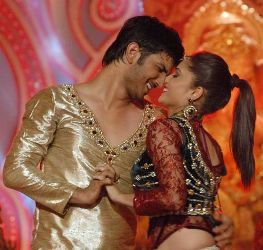 In the Zee Rishtey Awards that was aired yesterday, there was a comic skit that talked about the 'Suhaag Raat' of the lead protagonists of Zee TV's Pavitra Rishta, and how Manav's mother has always been a 'Kabab Main Haddi' to it!! . Well, it looks as though the Gods have already answered Manav and Archana's prayers, as the latest is that the couple will soon consummate their marriage in the romantic locales of Pune which will be their first honey moon after marriage.

A reliable source from the set informs, "Soon Archana's parents will accept the wedding of Archana (Ankita Lokhande) and Manav (Sushant Singh Rajput) and they plan to send them off for a honeymoon".

"There will be some great romantic scenes shot between the couple and the viewers will get what they exactly wanted. The unit is all set to go to Pune to shoot the honey moon sequence. The makers plan to incoporate the essence of Pune and its beautiful locales in the shoot", adds source.

We contacted Ankita Lokhande who confirmed, "Yes, tomorrow we will leave for Pune as our honeymoon shoot will be shot there."

We tried contacting Sushant,  but he remained unavailable for his comments.

Guess this is a good Year ending treat for the loyal viewers of Pavitra Rishta..

anki.shus 9 years ago hi ankita hw r u nw u go to honeymoon with manav thanx lot of i want to success u r honeymoon

hustlers 9 years ago i watched u r promos its so nice love this.......

rajkumar11cc 9 years ago hi Aaditi we only luv u we luved the way u were yesterday hum mein to tumari har ada se pyar hai we admire u a lot ur the BEST actress in the tele industry and we continue to luv u always ur doing a great job in sanjini and wish to see u in lead soonnnnnnnnnnnnnnnnnnnn............mis u as always keep it up ........

-Preeti- 9 years ago Finally .... people accept the marriage now i just hope Savita Aai too accepts it and forgets abt the past

nikitagmc 9 years ago Oh thank God, we will finally see something good in the show for a change!!!

mandy0310 9 years ago Can't wait to see this!!! Finally some privacy and romantic moments

harshitti_fan 9 years ago finally, armaan scenes, thanx for this news india-forums, this news made my day