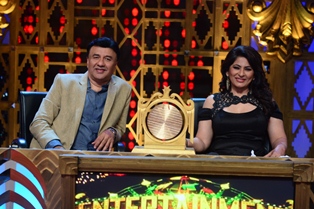 Farah Khan will not be seen in the upcoming episodes of Sony TV's Entertainment Ke Liye Kuch Bhi Karega. Surprised! Well, get ready for a bigger one. The witty judge will be replaced by another equally funny and hilarious judge. She is none other than comedy queen Archana Puran Singh.

The upcoming episode of EKLKBK will see Anu Malik judging the show minus queen Khan Farah'. The powerhouse director is busy with the production of her upcoming film Happy New Year' and is unable to give sufficient time for the shoot. A little birdie from the sets informed that, the channel were desperately searching for someone to step in and their search ended with laughter queen Archana Puran Singh.

Sources from the sets have informed us that inspired by a young girl, Archana will be seen shocking everyone by breaking a brick with her hand and showing no fear while performing the stunts. That's not all!! She will also be seen grooving on the stage with the contestants and having a gala time with co-judge Anu Malik and hosts Mona and Krushna.

The show Entertainment Ke Liye Kuch Bhi Karega will witness an interesting twist. Farah Khan, associated with the show ever since its commencement will be missing in action. The lady synonymous with the boisterous laugh Archana Puran Singh, will come to the rescue and fill in for Farah's absenteeism.

Sources from the sets have informed us that Archana was very excited to be a part of pagalpanti express with judge Anu Malik and hosts Krushna and Mona and had a gala time with the contestants too. Inspired by a young girl, Archana Puran Singh even broke a tile with her bare hand. An excited Archana expressed her feelings and said, "In this stunt, my physical competitiveness really came in handy. The moment I looked at the tiles, I said to myself "izzat ka sawal hai" and put my full effort into the chop! Also, I was completely blown away by the acts and the energy on the sets is comparable to Comedy Circus. Also, Anu Malik's 'shayari' is...ab main kya kahoon? Subhanallah!!! Also, it was good to see Krushna perform LIVE again."

This is not all! The entertainment quotient went a few notches higher when Krushna along with Anu Malik took everyone on a laughter riot when they tried the pole dance. Mona Jaswir Singh also grooved on the stage and performed Kathak with the contestants.

.dream-catcher. 8 years ago LOL He is from India, Jharkhand(Dhnabad) a foreigner??? How??