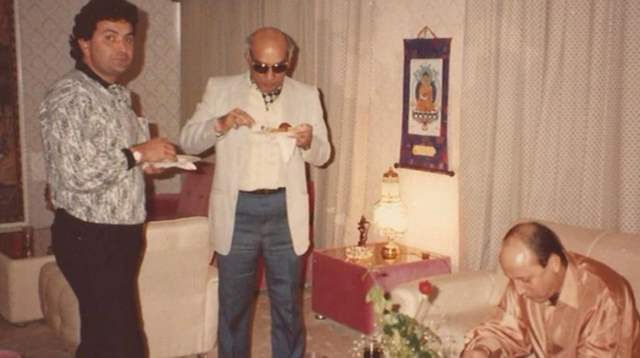 Bollywood veteran actor Anupam Kher is quite active on social media. The actor keeps his followers interested on his page by posting updates on his personal life, views, and ideas on social topics, as well as his professional life.

On Monday, he posted a beautiful nostalgic reminiscence on Instagram for his followers which included legends, Rishi Kapoor and Yash Chopra.

In the photo, late actor Rishi Kapoor is posing for the camera while Anupam Kher and late filmmaker Yash Chopra are seen eating their lunches. The image appears to be from the "Chandni" era, featuring Vinod Khanna and Sridevi. Anupam added a message on the photo that recalled them.

"A pic is worth a thousand words, but memory is priceless! Miss my friends! ❤️ #RishiKapoor #YashChopra ji #Simplicity #Foodies #02121988."

Soon after he posted the picture, fans felt nostalgic about it. One of the fans wrote, "#oldisgold memory❤️." Another fan commented, "You people have lived a wonderful life which is full of best memories and experiences 👍👍." While another wrote, "OMG Rishi Sir looking so Fabulous". Anupam Kher's 'The Kashmir Files' co-star Darshan Kumaar dropped heart emojis.

Meanwhile, Anupam Kher recently wrapped up the shooting of his next film, 'The Last Signature'. He will now begin shooting for Satish Kaushik's 'Kaagaz 2'.