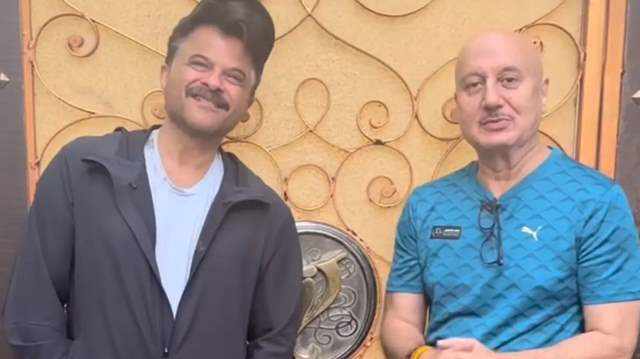 In addition to being on-screen mates, Anupam Kher and Anil Kapoor also have a close relationship off-screen. Hum Aapke Dil Mein Rehte Hain, Ram Lakhan, Roop Ki Rani Choron Ka Raja, and Hamara Dil Aapke Paas Hain are just a few of the movies in which the two actors have starred in together.

Many of their movies have been critically acclaimed and commercially successful. Anupam recently posted a video with Anil on his social media account and reminisced about their initial days in the industry.

In the video, Anil and Anupam can be seen standing outside film director Yash Chopra's residence. As they stood there, Anupam says, this was the first house he visited while he was a struggling actor. Anil further added that this wasn't the first place for him, but he had surely been there at some point of time in his life.

Have a look at the video below:

They then thanked Yash Chopra for shaping their career's and remebered him for all his contributions for the entertainmnet industry.

(In front of Yash ji's house: While going for morning walk, Anil Kapoor and I stopped in front of #YashChopra ji house to relive old memories and seek blessings too! Yash ji has a huge contribution in our (especially my) life! Thank you Sir ji for your love and the moments spent with you! Incidentally today is also #33YearsOfChandni!)