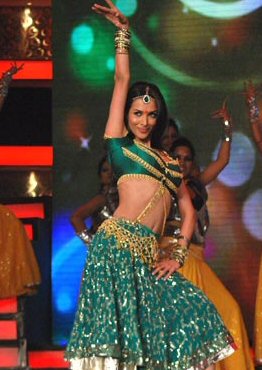 Choreographer-director Farah Khan says she and Malaika Arora were under a lot of pressure while shooting for the song "Anarkali disco chali" for "Housefull 2" because so far their team has been hugely successful.

The 47-year-old has choreographed the song for her brother Sajid Khan's directorial venture "Housefull 2", which is being produced by Sajid Nadiadwala.

"I think Malaika and me have a track record. We have done three (hit) songs together and all three of them have been very successful, so there was a lot of pressure. The song Sajid and Nadiadwala had given was 'Anarkali disco chali', which was a different take for both of us," Farah said at a promotional event for "Housefull 2".

Talking about her younger brother Sajid, Farah said she is very proud of him for belting big and hit films like "Housefull" and "Heyy Babyy".

"I feel very proud that Sajid is making such big films and he is making such hit films. For me, he will always be my younger brother. Every time I feel that I will quit being a choreographer, these two (Sajid Khan and Sajid Nadiadwala) take dates from me over Rakshabandhan," said Farah.

Meawhile, Farah is busy with her maiden acting assignment - she is making her debut with "Shirin Farhad Ki Nikal Padi" opposite Boman Irani.

'Naagin 5' To Welcome Two New Entries in The Form of Karan ...
4 minutes ago